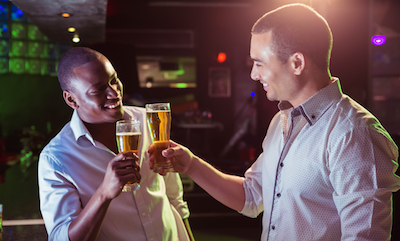 Adults in South Africa consume more alcohol than adults in most other countries. Previous research has shown this comes with high rates of fetal alcohol syndrome and is a driver of the country’s leading causes of death: sexually transmitted infections and interpersonal violence. In response, the South African government is now considering the Liquor Products Amendment, which includes provisions meant to reduce how much South Africans drink.

Now, the first study to look at contextual factors surrounding heavy drinking in South Africa, led by School of Public Health researchers, finds high-risk drinking is common in the country, with larger container size emerging as the factor most associated with heavy drinking.

“Given the atypically high prevalence of heavy drinking among South African drinkers, upstream approaches like the policies outlined in the Liquor Product Amendment bill have the potential to prevent a wide array of harms by focusing on a common root cause: alcohol,” says lead study author Pamela Trangenstein, a postdoctoral associate in the Department of Health Law, Policy & Management.

The researchers used data from the South African arm of the multi-country International Alcohol Control study, conducted in 2014 in the Tshwane Metropole, located around the country’s capital, Pretoria. That study gathered demographic information, as well as data on what, where, when, and how much respondents drink.

Even with the more conservative definition of heavy drinking, Trangenstein and her colleagues found that 53 percent of respondents in Tshwane who reported any alcohol consumption qualified as heavy drinkers.This finding is higher than previous estimates of heavy drinking in South Africa.

Alcohol production, sale, and consumption are largely “self-regulated” in South Africa, the authors write. The proposed Liquor Products Amendment would raise the drinking age from 18 to 21 years old, establish a minimum buffer between alcohol outlets and other outlets or sensitive locations such as schools, and hold alcohol manufacturers and suppliers of alcohol to unlicensed alcohol outlets liable for damages resulting from consumption of their products. If it does pass, Trangenstein says, this study will provide a helpful baseline to see if the law makes a positive difference.