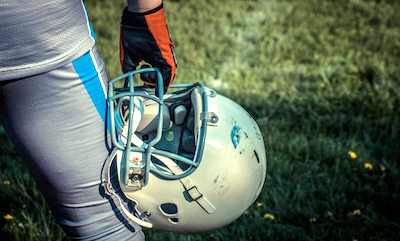 The discovery of chronic traumatic encephalopathy (CTE) in people with repeated head trauma has raised questions about the health risks of football, from youth tackle football to the National Football League (NFL). Currently, CTE can only be diagnosed after death, when an examination of the brain shows a build-up of an abnormal form of tau protein in a specific pattern.

But a new study co-authored by a School of Public Health researcher has used an experimental positron emission tomography (PET) scan to detect this pattern of tau protein build-up in the brains of a group of living former NFL players with cognitive, mood, and behavior symptoms.

The study, published in the New England Journal of Medicine, also found that more years of tackle football played (across all levels, including youth football) was associated with higher tau protein levels detected by the PET scan. However, there was no relationship between the tau PET levels and cognitive test performance or severity of mood and behavior symptoms.

“This study increases significantly our understanding of CTE and gets us one step closer in diagnosing the disease earlier in life,” says study co-author Yorghos Tripodis, research associate professor of biostatistics. “Our ultimate goal is to design treatments for CTE, but we are not currently there yet.”

The researchers used experimental flortaucipir PET scans to assess tau in the brains of 26 living former NFL players with cognitive, mood, and behavior symptoms between the ages of 40 and 69, and a control group of 31 men in the same age group who did not have these symptoms and did not have history of traumatic brain injury.

They found that the tau PET levels were significantly higher in the former NFL players than in the control group, and that the tau was in the same areas of the brain as in post-mortem cases of diagnosed CTE.

“The results of this study provide initial support for the flortaucipir PET scan to detect abnormal tau from CTE during life, says Robert Stern, the study’s lead author and a professor of neurology, neurosurgery, and anatomy and neurobiology at the School of Medicine. “These results do not mean that we can now diagnose CTE during life or that this experimental test is ready for use in the clinic.”

The researchers also used FDA-approved florbetapir PET scans to assess amyloid plaque in the study participants. While both conditions likely involve progressive loss of brain cells, Alzheimer’s disease is characterized by a build-up of amyloid plaques, while CTE involves a relative lack of amyloid plaques. In the current study, the researchers found no difference in the amyloids in the former NFL players and the control group. Only one former NFL player had amyloid PET measurements comparable to those seen in Alzheimer’s disease.

With support from NIH, the authors are working with additional researchers to conduct a longitudinal study called the DIAGNOSE CTE Research Project in former NFL players, former college football players, and persons without a history of contact sports. Initial results of that study are expected in early 2020.

The study was conducted by a multidisciplinary group of researchers from Boston University, Banner Alzheimer’s Institute, Mayo Clinic Arizona, Brigham and Women’s Hospital, and Avid Radiopharmaceuticals.