Next Saturday, members of the School of Public Health class of 2018 will walk across a stage at the BU Track and Tennis Center, and, in the presence of family and friends, receive the degrees they have earned. Reflecting on their accomplishment, I have found myself thinking about the central mission of public health. Our aim is to improve the social, economic, and environmental conditions that shape health, with special focus on closing health gaps and caring for the health of vulnerable populations. This mission is, at heart, a call to correct the underlying injustices in our society that can manifest as disease and injury. With each passing year, I become more convinced that there can be no health without social justice, and that public health must address injustice if it is to create a world that generates health, rather than a world that too often undermines it. With this in mind, we today rerun a modified Dean’s Note on the link between health and social justice, in the spirit of the class of 2018, with high hopes for all they will do to build a healthier, more just world. 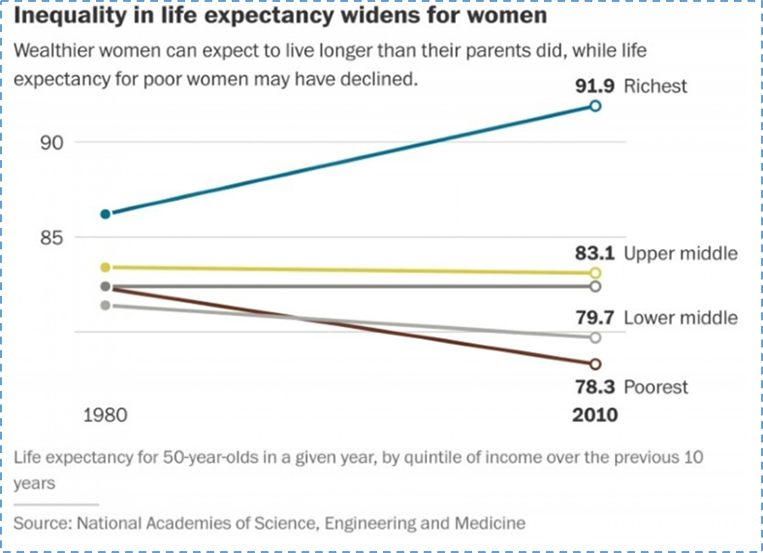 These data are at the core of the mission of public health, aiming as we do to improve the health of all populations. They remind us that socioeconomic position has been one of the foundational determinants of population health since time immemorial and that we will fail if we aim to improve health without grappling with the underlying maldistribution of wealth, opportunities, and privilege within a society. A social justice approach to population health challenges us to deal with these underlying concerns, to recognize that racism, socioeconomic inequality, gender discrimination, and hate, to name a few, have negative consequences for health, and that we simply cannot improve the health of populations without tackling these foundational causes, a point made repeatedly and eloquently in a large body of public health literature.

How, exactly, does a social justice approach inform action? While he was confined to a Birmingham jail in 1963, Martin Luther King Jr. had a lot of time to consider this very question. He expressed his thoughts in his celebrated letter from that confinement. “I am in Birmingham because injustice is here.… I am cognizant of the interrelatedness of all communities and states. I cannot sit idly by in Atlanta and not be concerned about what happens in Birmingham. Injustice anywhere is a threat to justice everywhere.” King’s eloquence is both inspiring and direct in its implications for public health. It speaks to the urgency that informs our work, and the work of anyone who tries to help populations that are under threat. It is worth noting that King took care to ground his sense of justice in an awareness of the “interrelatedness of all communities.” He recognized, as we must, that inequalities are never the exclusive problem of the group they seem to most directly affect. Health, in particular, is interconnected; whenever a distinct group suffers from poor outcomes, the burden will be shared across populations in ways both subtle and overt.

Our pursuit of public health is therefore inextricably intertwined with how effectively we can reduce inequities within populations, for the good of all populations. This is perhaps best captured by the observation that the US spends far more on health care than any other country in the world, but has far worse health outcomes than any of our peer countries. The reason is simple: we devote extraordinary resources to delivering perhaps the best medical care in the world, but shamefully few resources towards correcting the underlying social, economic, and cultural structures that shape health inequities within our population. This is well captured every time we note, for example, the higher risk of heart trouble run by Latinos, or the fact that black people die sooner than white people, or that, in 2015, the maternal mortality rate actually increased over the previous year. Jennifer Prah Ruger, in her work on the subject, eloquently captures our skewed priorities, noting: “Theories of social justice (eg, fair and equitable treatment of people) have typically focused on justifying health care (medicine and public health) as a special social good…In general, less attention has been paid to universal concerns of social justice with respect to health itself.”

I realize that, in discussing social justice in these terms, I am saying out loud what many might consider to be implicit in our work, and so this note could perhaps be characterized as a statement of the obvious. I persist for three reasons.

First, as scholars we know that there is often utility in reestablishing first principles. Indeed, social justice is so central to public health that it becomes, paradoxically, easy to overlook, like water to the proverbial fish.

My second reason has to do with how we communicate our message. While the social justice component of public health might be clear to us, it is not necessarily clear to the wider world. Where we see disparities, for example, many may only see a need for better treatment, or perhaps take the view that lopsided health outcomes are merely an unfortunate fact of life. Historically, this view has obstructed many justice-oriented change movements. At the time of Dr. King’s incarceration, the problem of Jim Crow, while obvious to us now as a moral travesty, was to some just another aspect of the American status quo. Many people did not see it this way, of course, and it is in large part thanks to the success of these dissenters at framing the issue as a matter of social justice that we no longer have legalized segregation in this country. Our own efforts would benefit from a similar, concerted emphasis.

Third, the statement and restatement of core challenges stands to nudge, to make a difference. Writing with unprecedented fierceness in The Jungle, Upton Sinclair denounced mistreatment of employees, and the inhumane conditions under which they worked in the meatpacking industry in Chicago about 100 years ago. His work was a quintessential call to social justice, leading to legislation that regulated a range of economic activity. It was a notable example of the resonance of social justice as a call to action, with direct implications for the improvement of the health of the public.

Where does our sense of justice come from? What is its ethical value? In his Nicomachean Ethics, Aristotle deals at length with these considerations. His opinions include the observation, “Justice alone of the virtues is thought to be ‘another’s good,’ because it is related to our neighbor and does what is advantageous to another.” As we seek to improve the health of populations, it is worth remembering that our commitment in this area might be motivated, at core, by a spirit of simple neighborliness.

Acknowledgement: I would like to acknowledge the contributions of Eric DelGizzo and Catherine Ettman to this Dean’s Note.

Why There Can Be No Health Without Social Justice