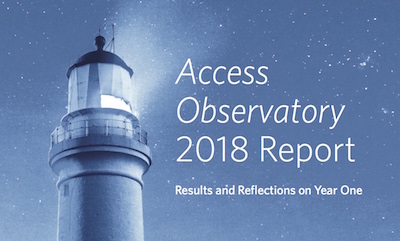 A team of School of Public Health researchers has published the inaugural report of Access Observatory, a first-of-its-kind global reporting platform for tracking pharmaceutical companies’ contributions to disease prevention and treatment. The report was published on June 25.

“There is widespread skepticism about whether the programs of the pharma companies really make a difference,” Laing says. “Some people believe that good intention must lead to good outcomes, while others argue that these programs do not respond to local need and may actually cause harm.”

Laing says transparent reporting is vital, but existing industry reporting is based largely on confidential data. “With the Access Observatory we are breaking new ground,” he says. “All data is freely available to the public.”

Access Observatory reports on Access Accelerated, a new collaboration between several leading biopharmaceutical companies, the World Bank, and the International Union for Cancer Control. The collaboration aims to improve access for prevention and treatment of non-communicable diseases (NCDs) in low- and middle-income countries.

The SPH researchers developed Access Observatory with a new framework where companies provide standardized program information. The team then independently reviews the information to ensure completeness, clarity, and consistency. “The measurement framework that our team developed allows for comparison between and synthesis across programs,” Rockers says. “We are able to identify key learnings which would otherwise not be obtained from a single program. In this way, the Access Observatory can generate novel insights that will help to improve existing programs and identify new innovations.”

In the first year of the Access Observatory, companies have registered 62 Access Accelerated programs operating in 103 countries. Most programs are operating in sub-Saharan Africa and Southeast Asia, with only a few from Latin America. The majority of programs reported a focus on cancer, followed by diabetes and cardiovascular disease. One-third of the programs offer medicines or technologies to address NCDs. Across the 62 programs, there are 198 partnerships between companies and other implementing organizations, with two-thirds of programs having at least one public sector partner.

Laing says the large number of implementing partners is a pleasant surprise, and has important implications for Access Accelerated’s work. “Implementing partners play a critical role in data collection and reporting back to companies, so grants and contracts between companies and these partners need to take data reporting into consideration from the start,” he says.

Rockers says Access Observatory sets new standards in measurement and reporting on social programs that are relevant not only to the pharmaceutical industry but also other industries. “Greater investments in measurement are necessary to generate evidence on social impact,” he says. “The potential returns on such investments are large, because effort and time spent measuring impact and developing evidence about what works will help direct future investments toward more effective programs, to the benefit of both industry and society.”