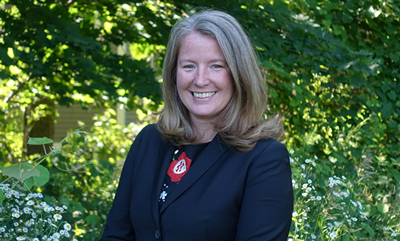 “We can get more done by listening to each other, respecting each other, and working together.”

That sentiment formed a core element of doctoral student Tami Gouveia’s successful campaign to become the next state representative for Massachusetts’ 14th District. On November 6, Gouveia (SSW’11, SPH’12) won a landslide victory for the House seat that represents the towns of Acton, Carlisle, Chelmsford, and Concord.

Unlike many political campaigns that embrace vitriolic discourse, Gouveia and her Green-Rainbow Party challenger Danny Factor maintained courteous interchanges throughout the campaign, and in her speech on Tuesday, Gouveia encouraged her supporters to reach out to Factor as an ally on the issues they care about.

“We definitely need more civility in politics. It was a major part of my message,” Gouveia says. “We need politicians who will put their differences aside and find common ground, so that we can develop policies that are critical to our well-being now, and for future generations.”

Gouveia ran for office after spending more than 15 years fighting for social and economic justice, creating partnerships, programs, and policies that address health and social service issues in Massachusetts. Gouveia served as the executive director of Tobacco Free Mass, during which time she helped negotiate a state bill to raise the tobacco sales age to 21 and expand restrictions on e-cigarettes. She also spent several years developing programs and advocating for the prevention of youth substance abuse and addiction at nonprofit organizations in Lawrence and Lowell. As the founder of the Massachusetts Chapter of the Women’s March on Washington, she galvanized 10,000 people to participate in the historic DC march in 2017. Most recently, Gouveia has served as the program director for the health systems think tank Rethink Health.

As a progressive Democrat, Gouveia believes the most critical issues facing residents in the state are health care, transportation, the environment, and government transparency and accessibility. She supports a single-payer healthcare system and much-needed investments into Massachusetts’ roadways and underfunded public transportation system. Gouveia concentrated in environmental health for her MPH, and she is eager to continue supporting green initiatives and reduce reliance on fossil fuels.

“What I’ve learned in my doctoral program has made me a better employee at Rethink Health, and will make me a better legislator because I will be able to really dig into the research and the details of specific policies,” Gouveia says.

“At my core, I really believe that everything that is decided at the State House ultimately will have an impact on health. If people are on clogged roadways and on trains that are breaking down, they’re not cooking a healthy meal, or reading to their children, or exercising, or volunteering in their community.”

Gouveia also plans to push for increases in government transparency and access, endeavors that she says are often overlooked in politics.

“We know that people who are engaged in government tend to be healthier, and people feel good when they’re contributing back to society and are engaged in decision-making,” she says.

Gouveia’s victory on Tuesday occurred during an election season that produced historic wins for female candidates at both the federal and state levels. Fellow Massachusetts candidates Ayanna Pressley, Becca Rausch, and Tram Nguyen all prevailed against male incumbents in the primary or general election.

But Gouveia concedes that women still face an uphill battle for equal representation on Beacon Hill. She notes that, despite the success of female candidates on Tuesday, it still has been tough for women to raise the amount of money need to run a successful statewide campaign. Speaking as a single mother, Gouveia says the state’s limitations on public campaign finance contributions can be detrimental to candidates with limited resources or other financial obligations.

“It’s challenging to run a successful campaign when you have other financial barriers in your life, and you have to pay for campaign staff, an office, literature, and all of the things you need to outreach effectively to voters and get your name out there,” she says.

As she expressed in her acceptance speech, Gouveia is eager to work with lawmakers across the aisle. She sees examples every day where local politicians overcome partisan divides in an effort to improve the lives of everyday citizens.

“Whether it’s building a new playground, or creating new bike lanes, or making sure that seniors have housing—people are coming together to do good on behalf of all of the people in this state,” she says.

Gouveia says it was encouraging to connect with so many local residents throughout the campaign.

“I ran as someone who will listen to people’s concerns and fears, hopes, and solutions,” she says. “We knocked on over 20,000 doors and talked to thousands of families. It’s really encouraging how people will invite you into their lives to talk for five minutes or to have a lengthy conversation about housing, health care, and traffic woes. It shows that people do care about the issues and they are paying attention.

“That gives me a lot of hope.”

‘I Ran As Someone Who Will Listen to People’s Concerns’