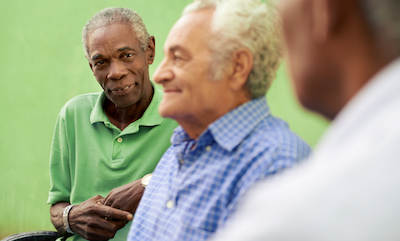 A growing body of evidence indicates that rates of dementia may be declining, in part because older adults’ cognitive abilities, such as learning and memory functions, are better than those of older adults in the past. But most data have come from almost entirely White cohorts living in high-income countries, calling into question the universality of the trend.

Now, a study of a majority-Black cohort, led by an SPH researcher, finds no clear upward trend in cognitive abilities among older adults.

Published in a special supplement to the Journal of Gerontology aiming to broaden the understanding of dementia trends in the United States, the study found trends in cognitive performance differed by race and cognitive function. Although the highest scores in cognitive performance rose in each consecutive round of the study, the lowest scores dropped precipitously. Black participants also scored consistently lower than their White counterparts.

“Our findings suggest that the previously observed upswings in cognitive abilities in older age might not be shared by all groups,” says lead author Jennifer Weuve, associate professor of epidemiology.

The study used data from the Chicago Health and Aging Project (CHAP), which has followed a total of 10,802 individuals 65 years old or older living on the south side of Chicago since 1993. The cohort is 60 percent Black and 40 percent White by self-identification, meaning it has the greatest number of Black participants—often by an order of magnitude—than any previous comparison of cognitive decline and dementia in Black and White older adults.

CHAP participants underwent cognitive assessments in six three-year study cycles from 1993–1996 through 2010–2012. The researchers computed three measures of cognitive performance: episodic memory, perceptual speed, and a “global” measure of cognition that summarized performance on the entire battery of four tests.

The researchers found a modest decline in mean global cognitive scores over the 18-year period. They found a steeper drop in perceptual speed than in episodic memory, with a more pronounced difference in the rate of decline of the two measures among White participants than Black participants. The researchers also saw different trends in the top-scoring and bottom-scoring quartiles of participants, with scores for the top quartile rising slightly over the study period and scores for the bottom quartile dropping dramatically.

The disparity between Black and White participants’ mean scores narrowed over the first five of the three-year cycles, from 1993 to 2009, but widened again between 2009 and 2012, especially in the perceptual speed score. (Read about previous CHAP research on possible causes of the racial disparity in cognitive performance here.)

“Our study is among the few to include non-White participants, and among the few to examine secular trends among the highest- and lowest-performing older adults,” Weuve says. “If the goal is to understand the full burden of cognitive aging on society, monitoring cognitive and dementia trends in all segments of the population is fundamental.”

Other co-authors of the study were: Kumar B. Rajan and Denis A. Evans of the Rush Institute for Healthy Aging; and Lisa L. Barnes and Robert S. Wilson of the Rush Alzheimer’s Disease Center and the Department of Neurological Sciences at Rush University Medical Center.

Upswings in Older-Age Cognitive Ability May Not Be Universal