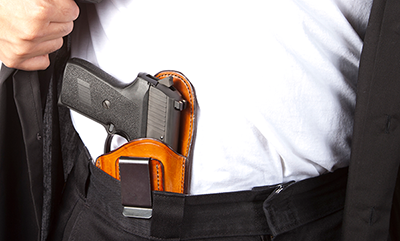 Easier access to concealed firearms is associated with significantly higher rates of handgun-related homicide, according to a new study led by a School of Public Health researcher.

The study, published in the American Journal of Public Health, suggests that current trends towards more permissive concealed-carry laws are inconsistent with the promotion of public safety.

“Some have argued that the more armed citizens there are, the lower the firearm homicide rate will be, because the feared or actual presence of armed citizens may deter violent crime,” said lead author Michael Siegel, professor of community health sciences. “Our study findings suggest that this is not the case.”

Currently, all states allow certain people to carry a concealed handgun, but there are variations in permitting policy. Nine states have “may issue” laws, in which law enforcement officials have wide discretion over whether to issue concealed carry permits; police chiefs can deny a permit if they deem the applicant to be at risk of committing violence even if there is not a criminal history. In 29 states, there is little or no discretion; these are referred to as “shall issue” states. No permit is necessary to carry a concealed handgun in 12 states.

Using data from the Centers for Disease Control and Prevention’s Web-Based Injury Statistics Query and Reporting Systems database, the researchers mapped out the relationship between changes in state concealed-carry permitting laws over time and total firearm-related homicide rates between 1991 and 2015. They also examined the Federal Bureau of Investigation’s Uniform Crime Reports Supplemental Homicide Reports (SHR) to differentiate between handgun and long-gun homicides. Previous studies have only examined homicide by all firearms.

The findings are particularly relevant, the researchers said, because Congress is currently considering “national concealed carry reciprocity” legislation. The legislation would allow anyone to carry a gun in any state as long as they have a concealed carry permit in their own state of residence. The researchers argue that adopting such a policy could lead to significant public health risks.

“The trend toward increasingly permissive concealed carry laws is inconsistent with public opinion, which tends to oppose the carrying of guns in public,” the authors wrote. “Our findings suggest that these laws may also be inconsistent with the promotion of public safety.”

The study was funded by the Robert Wood Johnson Foundation.