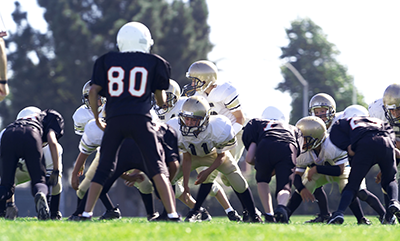 A new study co-authored by a School of Public Health researcher has found an association between participation in youth tackle football before age 12 and impaired mood and behavior later in life.

Researchers from Boston University’s Chronic Traumatic Encephalopathy (CTE) Center studied 214 former American football players, including 43 who played only through high school and 103 who played only through college. The average age of the former players at the time of the study was 51. Participants received telephone-administered cognitive tests and completed online measures of depression, behavioral regulation, apathy, and executive functioning (initiating activity, problem-solving, planning and organization). Results from former players who started playing tackle football before the age of 12 were compared against those of participants who started playing at age 12 or later.

The study showed that participation in youth football before age 12 increased the risk of problems with behavioral regulation, apathy, and executive functioning by two-fold and increased the risk of clinically elevated depression scores by three-fold. The increased risk was independent of the total number of years the participants played football, the number of concussions they reported, or whether they played through high school, college, or professionally. The researchers chose the cutoff of age 12 because the brain undergoes a key period of development and maturation between the years 10-12 in males. They examined other age cutoffs as well, though the age 12 cutoff led to the most robust findings. In addition, even when a specific age cutoff was not used, younger age of first exposure to football was associated with worse clinical function.

The new study follows previous research from the BU CTE Center that examined former professional players. In those studies, the former NFL players who started tackle football prior to age 12 had worse memory and mental flexibility, as well as structural brain changes on MRI scans, compared to former players who began at age 12 or older.

“This study adds to growing research suggesting that incurring repeated head impacts through tackle football before the age of 12 can lead to a greater risk for short- and long-term neurological consequences,” said Michael Alosco, lead author of the study and a post-doctoral fellow at the School of Medicine.

Corresponding author Robert Stern, professor of neurology, neurosurgery and anatomy and neurobiology at MED, said that “more research on this topic is needed before any recommendations on policy or rule changes can be made.” The researchers point out there are many important health and psychosocial benefits of participating in athletics and team sports during pre-adolescence.

Yorghos Tripodis, research associate professor of biostatistics, was senior co-author on the article, and Michael McLean, professor of environmental health and associate dean for research and faculty advancement, served as co-author. Researchers from the University of Wisconsin-Madison and Harvard University also participated in the study.