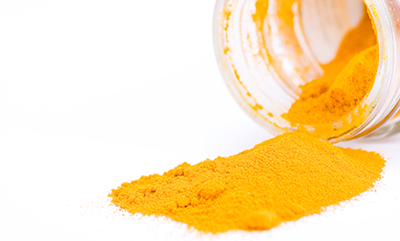 Potentially harmful levels of lead (Pb) were found in ground turmeric, a spice, purchased at Boston-area grocery stores, according to a report by researchers at the School of Public Health.

The study, in Public Health Reports, the official journal of the US Public Health Service and the US Surgeon General, also describes several cases of child lead poisoning in the US that have been linked to consumption of spices, including turmeric.

Turmeric is a mild spice commonly used to enhance the flavor and color of prepared foods and condiments, such as curries and mustard. It is primarily imported from India and other Asian countries. Over the past several years, hundreds of thousands of pounds of turmeric and curry powder sold in the US  have been recalled due to contamination with excessive levels of lead.

International media reports from India and Bangladesh suggest that the source of contamination may be adulteration with lead-chromate, which has a vibrant yellow color and is reportedly used to polish the roots before they are exported to the US and other countries. Lead has been found to negatively affect brain development in fetuses and young children.  Evidence suggests that it is associated with developmental delays, lowered IQ, and behavioral disorders such as hyperactivity, impulsivity, and aggression.

SPH researchers purchased 30 brands of turmeric from stores throughout the Boston area in 2011 and 2012 and measured the samples for lead concentrations. They detected lead in all samples and found excessive concentrations in two samples, with levels up to 1,000 times the amount allowable in candy.

The research team recommended that several measures be taken to prevent contaminated turmeric from reaching consumers, including the use of reliable tools for screening metals at facilities that package, store, and distribute turmeric, and at major ports. At the local level, clinicians and public health officials should be aware of the potential for exposure to excessive lead levels from consumption of processed turmeric, the researchers said.

“Research needs to focus on the source of lead contamination and approaches for preventing adulterated spices from entering the food supply,” said Wendy Heiger-Bernays, the study’s senior author and an associate professor of environmental health.