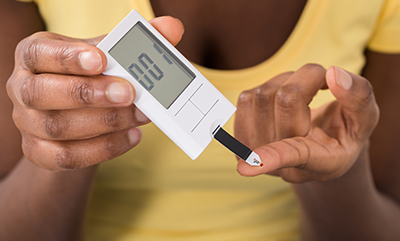 African American women with type 2 diabetes—often referred to as adult-onset diabetes—are at a greater risk for developing breast cancer, according to a new study led by a School of Public Health researcher.

The findings were published in Cancer Research.

The research was based on data of 54,337 African American women enrolled in Boston University’s Black Women’s Health Study who were cancer-free at enrollment in the study in 1995 and were followed for up to 18 years. During follow-up, 914 ER+ cases and 468 ER- cases were identified.

“While we observed no association for the most common type of breast cancer, the type that is responsive to estrogens, diabetic women were estimated to be at increased risk of developing estrogen receptor negative breast cancer, a more aggressive type of breast cancer which is twice as common in US black women as in white women,” said corresponding author Julie Palmer, professor of epidemiology, associate director of BU’s Slone Epidemiology Center, and associate director for population sciences at the BU–BMC Cancer Center.

According to Palmer, plausible explanations for an increased risk of ER- breast cancer among diabetics include chronic inflammation resulting from diabetes, which, among other actions, can promote carcinogenic processes.

“Inflammation is thought to play a bigger role in ER-negative breast cancer, and women with type 2 diabetes generally have higher levels of circulating inflammatory factors which can cause more inflammation in the tumor microenvironment, contributing to growth of cancers.”

Palmer stressed that further work is needed to corroborate these relatively new findings. “If these results are confirmed, type 2 diabetes would be a modifiable risk factor for ER-negative breast cancer,” she says. “Women could reduce their chances of getting ER-negative breast cancer by reducing their likelihood of getting type 2 diabetes. This would be yet another reason to treat diabetes early.”

The study was funded by the National Institutes of Health and in part by the Dahod Breast Cancer Research Program at MED.