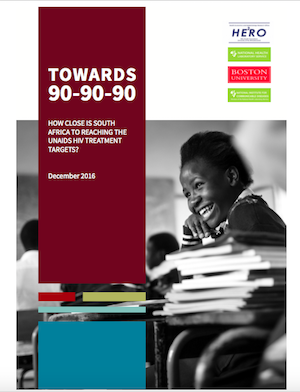 Using a new system for tracking HIV care in South Africa, School of Public Health researchers and their colleagues have created a policy brief outlining that country’s progress and challenges.

“Our particular vantage point is unique here,” says Assistant Professor of Global Health Jacob Bor, one of the contributors to the brief. “For the first time, we can observe people being retained in care not just at the clinic or facility they started treatment at, but throughout the whole health system.”

The brief shows the preliminary findings of a data system that allows for patient-level analysis of nearly everyone who has received care in South Africa since 2004.

The system leverages the data kept by the National Health Laboratory Service (NHLS) of South Africa, which conducts all HIV diagnostic and monitoring lab tests for the entire public sector in the country—but doesn’t keep track of which tests are from the same individual.

In a collaboration between BU, the University of the Witwatersrand, and the NHLS, and supported by USAID, NIH, and the World Bank, researchers created a matching technique that links up tests belonging to the same individual. That means researchers could build “a longitudinal HIV cohort using routine laboratory data,” Bor says. “We can observe entry into care and retention on treatment for the full public sector HIV program.”

Losing track of patients has been a major obstacle, Bor says, and the new system shows retention in care has actually been significantly underestimated. Using only clinic-based data, the researchers estimated a retention rate of under 16.7 percent. Using the new system, the retention rate was 54.5 percent.

“For the first time,” Bor says, “we’re able to see where people exit care, where they enter care, and what that churning looks like.”

“Because the laboratory data includes age, sex, and geographic location,” MacLeod says, “we are able to report the continuum of HIV care between men and women, adults and children and for provinces.  We haven’t been able to do that before.”

The brief also shows South Africans are seeking care earlier after infection. However, the researchers estimate only 43 percent of men living with HIV are on medication, compared to 60 percent of women, and disparities persist between provinces and districts. The brief also calls for more attention to adolescents, who have poorer treatment outcomes and are also newly seeking treatment at alarming rates.

“Being able to identify the specific geographic areas or demographic groups that are performing better or worse than others, to strategize for future interventions, is really key,” Bor says.