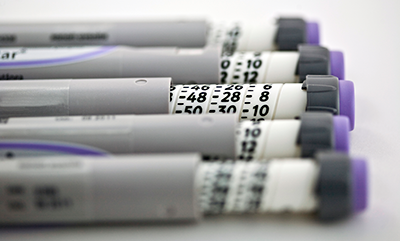 Most patients in India, including those with diabetes, seek health care in the private sector through out-of-pocket payments. A lack of market competition, direct sales that bypass pharmacies, and a move toward more expensive analogue insulin are creating significant barriers to access, says a new study authored by School of Public Health researchers.

The study in BMJ Global Health assessed insulin availability and prices in Delhi state in India through surveys and interviews. It found that the mean availability of human insulin in the pharmacy outlets analyzed was 44 percent (i.e. 44 percent of the pharmacies surveyed carried human insulin), and for the more expensive analogue insulin, just 13 percent. This was far lower than the World Health Organization’s availability target of 80 percent.

Besides the lack of availability, the study found that insulin prices were essentially “unaffordable” for most Indian patients. Consumers paid as much as 128 percent over insulin import prices because of supply chain mark-ups, taxes, and other costs. On average, private-sector consumers paid more than twice the price that the government paid to purchase insulin regardless of insulin type or place of manufacture, the study found.

In addition, most of the insulin products were manufactured and marketed by a handful of foreign, not Indian, companies.

“The Delhi insulin market is an oligopoly, and such limited market competition has implications for suppliers’ incentives to meet patients’ need and for insulin prices and usage in lower income countries,” says the study by Abhishek Sharma (MPH’15) and Warren Kaplan, clinical assistant professor of global health.

The authors recommend that India promote the production and supply of “quality-assured insulin” by domestic Indian manufacturers at lower prices than the multi-nationals, and combat mistrust of domestic products. “Doctors and patients in India believe that insulin from foreign countries is better, and they do not trust Indian companies,” the study says.

Kaplan said that a better understanding is needed by manufacturers, public and private healthcare providers, and patients with diabetes of the economic incentives and disincentives regarding insulin use and availability. He and Sharma further noted that some multinational insulin manufacturers, Indian doctors, and even wholesalers are selling insulin directly to patients, cutting out pharmacies. This may force pharmacists “to either not stock insulin at all, or stock mostly more expensive insulins, further reducing patients’ accessibility to insulin because of the cost factor,” they said.

The study findings are especially important given that India and other emerging markets are seeing a transition from human to analogue insulin, and that insulin biosimilars are expected to soon hit the market. Although the WHO Expert Committee on the Selection and Use of Essential Medicine has concluded that insulin analogues have “no significant clinical advantage” over recombinant human insulin, the inclusion of analogues on the Delhi essential medicine list has “major cost implications for insulin therapy in India,” Sharma said.

The study found that analogue insulin cartridges/pens were five to nine times more expensive than human insulin vials, and that annual per patient insulin costs could reach up to six times India’s per capita health spending.

The research was funded, in part, through a Santander Scholarship that Sharma received from SPH.

Access to Insulin in India Constrained by Costs, Lack of Market Competition