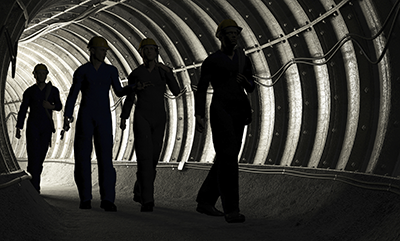 In settings with a high prevalence of HIV, such as South Africa, provision of antiretroviral therapy programs (ART) in the workplace can result in cost savings for companies due to reductions in healthcare costs, absenteeism, and staff turnover, according to a study led by a School of Public Health global health researcher.

In the study, published in PLOS Medicine, the research team developed a mathematical model to evaluate the past and future impacts and costs to a South African coal mining company of an ART program provided since 2002. The company was one of the first to provide services for HIV-infected employees in a poor country and provided HIV therapy years before it was available in the government sector. By the end of 2010, out of 9,252 employees, 1,149 had tested HIV positive in confirmatory tests and had been enrolled in the company’s wellness program.

The study by Gesine Meyer-Rath, a research assistant professor with the Department of Global Health, affiliated with the Center for Global Health and Development, and colleagues estimated that, as ART coverage increased from 10 percent to 97 percent of eligible employees, increases in the survival and retention of HIV-positive employees and reductions in absenteeism and benefit payments would lead to overall cost savings, compared to a scenario of no antiretroviral treatment provision. Specifically, the annual cost of HIV to the company would decrease by 5 percent, and the average cost per HIV positive employee would decrease by 14 percent by 2022.

Every year, more than 2 million people become newly infected with HIV, the virus that causes AIDS, usually by having unprotected sex with an infected partner. HIV can affect individuals in the prime of their working lives, thereby increasing absenteeism and turnover of the workforce, as well as the operating costs of companies working in countries where HIV infection is common.

The authors’ model estimated that savings would grow as ART coverage increased. Although the authors acknowledged some limitations of the study—for example, that the analysis did not examine the impact of HIV prevention policies on the miners or their families—the changes in costs were robust, translating into average savings of nearly $1 million per year.

Importantly, the researchers found that even in a country with very low HIV prevalence, ART provision would still save companies money compared to no ART program. The savings mainly accrue from reductions in benefit payments for death and ill-health retirement and in employee healthcare costs.

“Beyond making good business sense, a company-level HIV care program including ART could go a long way towards improving the strained labor relations in the South African mining sector, especially when improved access to healthcare extends to the entire community,” the authors wrote. “It is crucial that strategies such as those under study here are replicated in other companies in similar settings.”

Provision of HIV Treatment Can Save Companies Money