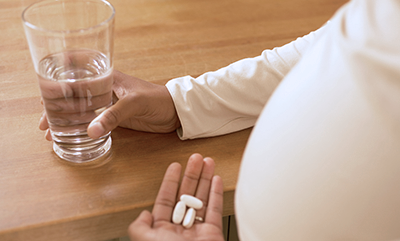 Integrating HIV treatment into prenatal care and linking new mothers and infants to community-based counselors improves the proportion of women initiated and retained in treatment, a study in southern Zambia led by School of Public Health researchers has found.

The study in the Journal of Acquired Immune Deficiency Syndromes attempted to address programmatic barriers to early initiation of combination antiretroviral therapy (cART) for HIV-positive pregnant women, including decentralized care, assessment delays and loss of women to follow-up care. Early treatment can decrease the rate of mother-to-child transmission of HIV.

The research team piloted an intervention at six government antenatal clinics (ANCs) in Southern Province, Zambia, that provided integrated antenatal and HIV care to pregnant women, including expedited blood-test results and HIV treatment onsite, follow-up of mother–infant pairs by community-based lay counselors, and early infant diagnostic testing for HIV. Pregnant women presenting to ANCs were tested for HIV and, if positive, were provided with five days of AZT and told to return to review their eligibility for cART. All HIV-positive women were directed to come for monthly visits for ongoing treatment and prenatal care. All HIV-exposed infants, meanwhile, were prescribed daily nevirapine for six weeks and were tested for HIV at six weeks, with follow-up testing at 6, 12, and 18 months.

The intervention boosted the proportion of HIV-positive pregnant women receiving CD4 counts (a blood test) from 50.6 percent to 77.2 percent. At the time of the study, a CD4 count was required to determine eligibility for cART. The proportion of cART-eligible women initiated on treatment increased from 27.5 percent to 71.5 percent, while the percentage of eligible HIV-exposed infants who were tested at six weeks increased from 41.9 percent to 55.8 percent.

The authors said the integrated approach has a number of advantages, including a “one-stop shop” that can streamline cART initiation by consolidating services, while also reducing stigma or fear of public disclosure of HIV status, as the clinics offer maternal and child health services, in addition to HIV care. The addition of a community-based lay counselor who follows a mother–infant pair through pregnancy, delivery, and breastfeeding “has the potential to boost maternal and infant ART adherence, reduce attrition, and provide much needed linkage to chronic HIV care,” they said.

Since publication of the study, the Government of Zambia has approved a new policy to treat all pregnant women with cART regardless of CD4 counts, the researchers said. The model evaluated in the study has since been scaled up throughout the country as an efficient way to reach pregnant women and initiate early HIV care and promote retention.

Researchers with Boston University’s PMTCT Integration Project have provided technical assistance to the Zambian Ministry of Health’s programming at more than 200 clinics in Southern Province for more than decade.

Other co-authors are from the Zambia Center for Applied Health Research and Development; Marie Stopes International, Lilongwe, Malawi; the Centers for Disease Control and Prevention, Lusaka, Zambia; the Ministry of Community Development, Mother and Child Health, Government of the Republic of Zambia; and the Perinatal HIV Research Unit, University of Witwatersrand, Johannesburg, South Africa.