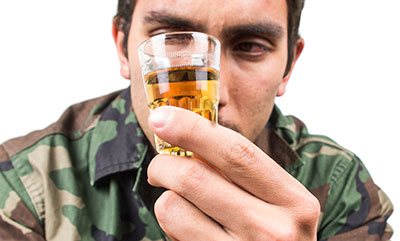 Alcohol use disorder exacerbates depression and post-traumatic stress symptoms in military service members who have been deployed in recent conflicts, according to a new study led by School of Public Health researchers.

The study in the Journal of Traumatic Stress followed more than 1,000 National Guard service members for four years after deployment to gauge risk factors for depression and post-traumatic stress (PTS) outcomes, and the effect of alcohol abuse on symptoms over time. The researchers documented four “trajectory groups” of depression among a subsample of recently deployed troops: those who were resistant to symptoms (55.8 percent); those who showed resilience, defined as experiencing a decline in previously elevated symptoms (18.7 percent); those who had a steady increase in symptoms over time (12.8 percent); and those who had chronic dysfunction (12.7 percent). The majority of soldiers in the sample also fell into the resistant or resilient categories for PTS symptoms.

Alcohol use disorder (AUD), defined as past-year alcohol abuse or dependence, was associated with an increase in both depression and PTS symptoms, with the largest effect seen on the higher-symptom groups.

“These findings that AUD exacerbated both depression and PTS symptom trajectories build on previous literature that co-morbidity can substantially, adversely affect outcomes in already vulnerable populations,” the researchers said. Understanding the role of alcohol use, they added, “is key in understanding longer-term psychopathology, as it modifies trajectories of depression and PTS.”

The study also found that being unmarried was associated with resilience to depression—which the authors said might be explained by a lack of relationship and family stress while deployed, which has been shown to contribute to depression in military populations. Also, service members deployed to war zones in Iraq or Afghanistan were more likely to be in the higher-symptom groups, and those who reported higher numbers of lifetime stressful events were more likely to be in higher-symptom categories of depression.

The authors said that generally, their findings suggest that a “longitudinal perspective” is needed when examining mental health outcomes in military service members.

SPH researchers on the study include: Laura Sampson and Gregory Cohen, statistical analysts in epidemiology, and Dean Sandro Galea. Co-authors were from the Mailman School of Public Health at Columbia University and the departments of psychiatry at Case Western Reserve University, the University of Toledo and the University of Michigan.

Alcohol Use Drives Up Depression among Military Service Members