Americans are increasingly eating more of their meals prepared away from home — particularly African Americans, who also have higher rates of obesity.

Young adults tend to eat out more often at fast-food restaurants, and these establishments are more often found in minority neighborhoods. A few studies have shown that frequently eating out is associated with greater weight gain than eating at home, but little previous research has focused on whether specific types of foods eaten at fast food and other restaurants have a greater effect.

In a new study, a research team from BU’s Slone Epidemiology Center examined the association between consumption of foods from restaurants and risk of becoming obese in a large cohort of young African American women. Their results, published online today in Ethnicity & Disease, provide evidence that frequently eating hamburgers from restaurants is associated with higher risk of obesity. 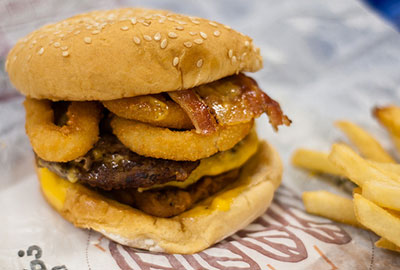 Higher intake of sugar-sweetened soft drinks, which are commonly consumed together with restaurant foods, also was independently associated with obesity risk.

The study, led by researchers affiliated with the BU School of Public Health, used data from the Black Women’s Health Study, an ongoing investigation of the health of 59,000 African American women that began in 1995. The analysis included younger women, aged 21 to 39 years, because most weight gain occurs before middle age. The women studied were not obese and had no history of cancer or cardiovascular disease at the start of follow-up.

Diet was assessed twice (in 1995 and 2001) using validated questionnaires, and information on the participants’ weights was collected every two years from the study’s start until 2011. The researchers examined the relationship of consumption of restaurant foods and sugar-sweetened soft drinks with risk of developing obesity (defined as body mass index ≥30 kg/m2).

The researchers found that women who ate burgers from restaurants at least twice a week were 26 percent more likely to become obese by the end of the study than those who rarely ate burgers, after controlling for factors including overall diet quality and sugar-sweetened soft drink consumption.

In addition, women who drank at least two sugar-sweetened soft drinks per day were 10 percent more likely to become obese than those who drank none, after controlling for overall diet quality and restaurant burger consumption.

The authors concluded that, “the identification of individual foods or beverages that are associated with weight gain provides a basis for specific and straightforward recommendations to help prevent obesity.”

Funding for the study came from the Aetna Foundation and the National Cancer Institute.