Researchers at the Boston University School of Public Health recently published results of a breast cancer analysis among women living in upper Cape Cod, MA (Gallagher et al. 2010). The upper Cape women who participated in the study were diagnosed with breast cancer from 1983-1993. The study was prompted by an earlier spatial analysis that revealed a geographic overlap between groundwater plumes in upper Cape Cod and an area of increased breast cancer risk (Vieira et al. 2005). These plumes indicated areas of concern around landfills and wastewater facilities, large point sources of contaminants to groundwater (see Figure 1). Researchers determined that among these plumes, the plume associated with the Barnstable Wastewater Pollution Control Facility (BWPCF) was the only point source with the potential to impact the drinking water of the women in the study. The BWPCF treats both residential and commercial waste from a broad geographic area. The investigators applied an extensive groundwater model to evaluate historic conditions and determined that effluent from the BWPCF could have reached public drinking water wells as early as 1966. Taking into account where women lived and their drinking water source (public, private, and bottled water), researchers found an association between Barnstable Water Company (BWC) drinking water impacted by the BWPCF plume and the occurrence of breast cancer. The strongest association was observed among women whose drinking water came from the BWC during 1966-1973, which was 15 to 20 years before their breast cancer diagnosis.

With only limited historical data available, researchers were unable to identify specific contaminants of concern in the drinking water. Furthermore, the study results may have been affected by other unknown environmental exposures unrelated to the BWPCF. In particular, it was not possible to separate a woman’s exposure to the BWPCF effluent and her possible exposure to contaminants from the Barnstable Airport. Area drinking water wells impacted by contaminants from the Airport were remediated in the 1990s, although the extent and timing of the contamination prior to this effort is not well understood. BWC water samples from 1984 show no appreciable levels of chemicals that would indicate potential contamination from the Barnstable Airport (Janik 1987, Table S3), but there were no data available for the period of highest risk for breast cancer (1966-1973). Private septic systems may also contaminate drinking water, although they are common throughout the entire upper Cape and may have impacted all participants, not just women drinking BWC water. The results of a prior study on wastewater contamination did not find an association with breast cancer (Brody et al. 2006). To account for the associations observed in the study, the unknown exposures would have had to be present in the drinking water at the same time as the pollution from the BWPCF (1966-1973).

It is important to note that the exposures of concern in this study are historic, occurring several decades ago, and whatever contaminants were in the groundwater in 1966-1973 are no longer present. Furthermore, area groundwater sources for drinking water are subject to more protections now, treatment and monitoring has improved, and the impact of wastewater on groundwater was carefully considered in recent expansion plans for the BWPCF. While this study emphasizes the importance of monitoring water quality in the upper Cape, it does not make any conclusions about the current impact of BWPCF on drinking water today. 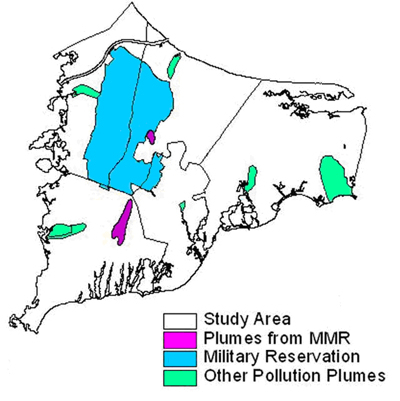