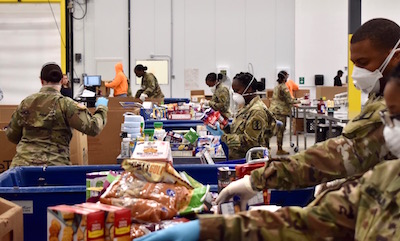 This viewpoint originally appeared in The Conversation.

The United States is experiencing its steepest economic slide in modern history. Tens of millions of Americans have filed new unemployment claims as the coronavirus shutters businesses and forces companies to lay off staff.

People need support to help them through the crisis in a few key ways —cash to meet immediate financial needs, health care to cover them should they become ill and housing even if they can’t make rent. Despite federal stimulus efforts north of $2 trillion—so far—it is likely that some of those currently being affected will fall through the cracks.

As scholars who study how people enroll in public programs and research social programs related to women’s health, we have seen how well-intentioned policies can sometimes fail those they are supposed to help.

We took a deeper look at how difficult it might be for people to navigate their way through the US’s patchwork of social safety net measures as they try to stay afloat during the pandemic and economic downturn. Here are four gaps that we found:

Congress passed stimulus measures that are providing some Americans with a one-time check of up to $1,200 per adult and $500 per dependent child along with a temporary boost in unemployment benefits. Many received their stimulus through direct deposit, but millions of low-income Americans experienced problems and delays receiving payment. As many as 20 million may have had stimulus deposits go to tax preparers who take a fee out of refunds because clients are too poor to pay for tax prep up front. There are a variety of other reasons for delays: if individuals haven’t filed their 2019 tax returns yet, if their address has changed recently or if they don’t have a bank account.

Two recent studies project that nearly 20 million Americans may face disruptions in employer-based health insurance, with as many as 11 million becoming uninsured. For those newly uninsured, living in a Medicaid expansion state like New York or California might mean you are OK. But even before the pandemic, there were already an estimated 2.3 million people living in nonexpansion states like Texas or Florida who fell into the coverage gap—making too much money to qualify for Medicaid and yet not enough to afford coverage.

4. Safe from eviction, but for how long?

The US’s social safety net is more a loose patchwork unprepared to handle a crisis like the pandemic, relying on disconnected public programs and old technology. The federal government is relying on short-term measures directed to those affected by the crisis, but we believe it does little to address the plight of those who were already economically vulnerable and those who will be long after this pandemic.

Disaster preparedness isn’t just the National Guard, personal protective equipment and bottled water anymore. This pandemic has shown that it is now also the ability to keep people economically afloat through a potentially prolonged and sudden financial crisis.