Home » News & Events » A Zero-Emissions Boston Could Save 288 Lives and $2.4 Billion Annually

A Zero-Emissions Boston Could Save 288 Lives and $2.4 Billion Annually 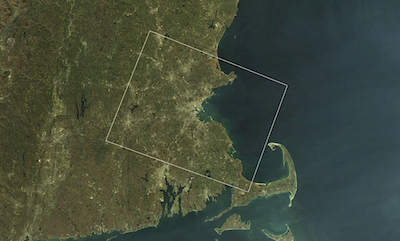 The 75-square-mile zone around Boston modeled in the study.

The City of Boston has set a goal of becoming carbon neutral by 2050, mainly by cutting emissions. But what if Boston eliminated all emissions now?

That is the question asked by a new School of Public Health study published in the journal Environmental Research Letters.

The estimated answer: over 200 deaths avoided in Boston (and the rest of Suffolk County) each year, with reductions in fatal and non-fatal cardiovascular and respiratory illness extending far beyond the city, from Worcester to Barnstable and into southern New Hampshire and northern Rhode Island.

The researchers also estimated that the resulting decrease in medical costs and lost/reduced work could save $1.7 billion in Suffolk County, and $2.4 billion for the entire 75-square-mile zone modeled in the study.

“Public health and climate policymaking are intertwined,” says study lead author Matthew Raifman, a doctoral student in environmental health. “While Boston’s climate policies are focused on reducing greenhouse gas emissions, these actions will also likely reduce deaths and improve the quality of life of residents of Boston and the surrounding region.”

Raifman, Kinney, and colleagues modeled two scenarios using the US Environmental Protection Agency’s Community Multiscale Air Quality model. In the first, the researchers created a model of 2011 emissions and estimated the status quo for two air pollutants known to harm health: PM2.5 (particulates with a diameter of less than 2.5 micrometers, or 3 percent of the diameter of a human hair) and O3 (ozone).

In the second scenario, the researchers set the human-made emissions from within Boston’s city limits to zero. They defined human-made emissions broadly, including motor vehicles, generators, rail, industry, all oil- and gas-burning, shipping and boating along the coast, and residential wood fires.

The researchers then compared PM2.5 and ozone levels between the two scenarios to estimate the impact that eliminating emissions from Boston would have on air quality across the region.  They found that a zero-emissions Boston would halve PM2.5 concentrations in the city itself, and slightly decrease concentrations for the rest of the modeled zone. Concentrations of ozone would also decrease across much of the modeled zone, although Boston and areas west of the city would actually see an increase in ozone during warmer months—which the researchers explain is because of the reduction in nitrogen oxide emissions that would normally transform ozone into other compounds.

The researchers then used the EPA’s Environmental Benefits Mapping and Analysis Program (BenMAP) Community Edition v1.5 to estimate how these changes in PM2.5 and ozone would affect health at the county level.

They estimated that these changes would result in 288 fewer deaths per year across the 75-square-mile area, mainly in Boston and the Greater Boston area. This would be 6 deaths avoided per 100,000 people in the region—which the researchers note is roughly equivalent to the state’s motor vehicle crash fatality rate.

The health benefits from the decrease in PM2.5 would mainly override the health harms of increased ozone. The researchers estimated that a zero-emissions Boston would prevent 116 non-fatal heart attacks, 46 cardiovascular hospitalizations, 117 cases of chronic bronchitis, and over 17,000 asthma attacks across the zone, again mainly in Boston. However, the high ozone levels would increase emergency room visits for asthma and respiratory hospitalizations.

Looking at the effects by race and ethnicity, the researchers found that the greatest reduction in deaths and non-fatal health issues relative to population size would be in people of color, and particularly black people, who the researchers note currently bear the greatest burden of environmental injustice and are more likely to live in Boston than any other area in the larger modeled zone.

The researchers estimated that the decrease in deaths, hospitalizations, days of missed work, and other benefits of a zero-emission Boston would translate to savings of $1.7 billion for Suffolk County, $182 million for Norfolk County, $159 million for Middlesex County, and tens of millions of dollars in savings for other surrounding counties in eastern Massachusetts and bordering states.

“In this study, we focused only on the City of Boston’s climate action plan, but it’s important to note that Boston’s actions will not occur in a vacuum,” Raifman says. “Many cities across the region are pursuing similar climate goals. The sum may be different from the parts.”

The study was co-authored by Armistead Russell and T. Nash Skipper of the School of Civil and Environmental Engineering at the George Institute of Technology.