Home » News & Events » Art and the Health of Populations

Art and the Health of Populations

This Tuesday, SPH will partner with the Boston University College of Fine Arts to host a gathering for members of the BU community in San Francisco. The theme of the event is “Art and Health.” Some have asked how these two subjects are linked, a question I look forward to exploring at the event, in conversation with CFA Dean Harvey Young. In advance of the event, revisiting a reflection on the intersection of art and health:

Population health is shaped by a range of economic, cultural, and environmental factors. Economic trends, political policies, climate change, the rise of social movements all have a hand in creating or undermining health. These conditions, of course, contribute to much more than health. They shape all aspects of the world we live in. They also inspire art as a representation of our world, holding a “mirror up to nature” that allows us to better understand the forces that shape the human story.

How have the conditions that influence population health shaped art? In the 19th century, the Industrial Revolution created substantial challenges for the health of the public and also served as a rich subject for painters, writers, and poets. Overcrowding, unsanitary conditions, and the spread of infectious disease led to landmark reforms like the Public Health Act of 1848; they also fueled the work of artists like Charles Dickens, Joseph Turner, and William Blake, who conjured enduring depictions of the economic and social changes that they witnessed. In novels like Oliver Twist and David Copperfield, Dickens dramatized how the effects of the Industrial Revolution victimized children and the poor. Blake also explored this theme, perhaps most poignantly in his “Chimney Sweeper” poems. Turner, for his part, illustrated the mechanization and increasingly rapid pace of the era in vivid paintings like his landscape Dudley, Worcestershire (Figure 1). 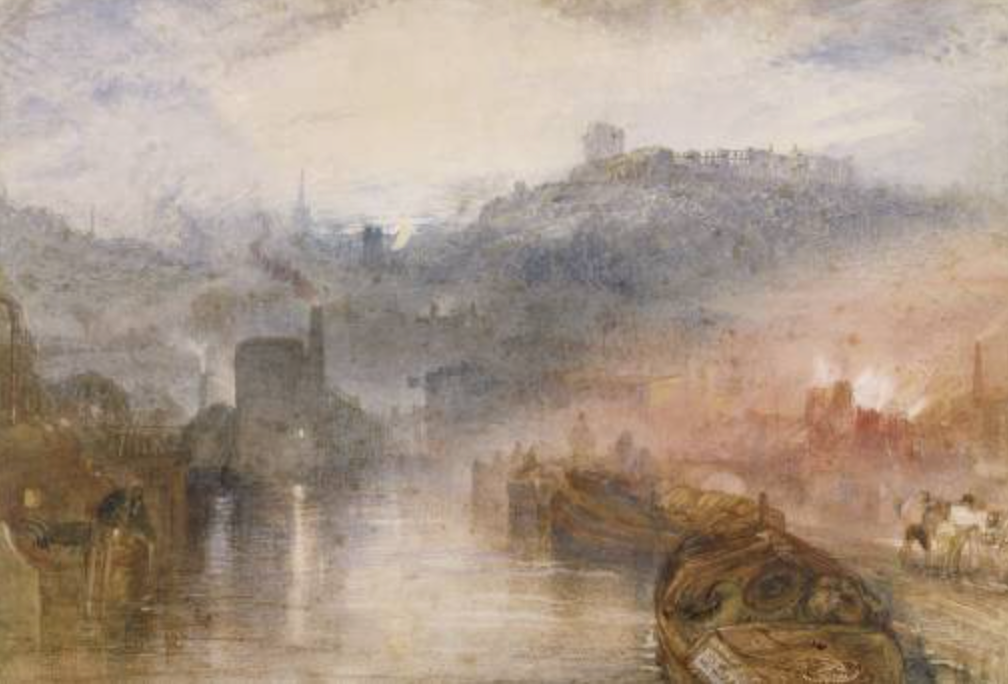 By engaging with the conditions of the period, these artists demonstrated how their changing society influenced, and often undermined, the health of populations. Dickens, in particular, was a noted advocate for marginalized and vulnerable groups. Through his art and his activism, he gave voice to the darker side of the Industrial Revolution and contributed to the groundswell of public opinion calling for needed reforms. The social conscience he articulated in his novels, which have never gone out of print, continues to influence thought and enlarge our capacity for empathy.

How has art shaped the way we think about health? Starting with the classics, the plays of Shakespeare, we see an example of how societies have, over time, regarded large-scale public health threats. During Shakespeare’s active period in the late 16th and early 17th century, England was vulnerable to outbreaks of the Bubonic Plague. At least 25,000 Londoners died in one 1603 outbreak alone. Fears of the plague were present at all levels of early modern society, and the theater was no exception. References to the plague appear frequently in Shakespeare’s plays, perhaps most famously in Romeo and Juliet. Towards the end of the tragedy, a messenger is sent to Romeo to inform him that Juliet has faked her death to avoid marrying another man. Unfortunately, the messenger is delayed by quarantine, leading Romeo to think Juliet is actually dead, and precipitating the lovers’ suicides at the end of the play—a literal fulfillment of Mercutio’s well-known curse, “A plague o’ both your houses!” In this sense, the pestilence is used by Shakespeare as a stand-in for the vagaries of fate, dooming the “star-crossed lovers.” The collective awareness that the plague could strike anyone at any time also shaped the trajectory of the visual arts. The memento mori (“remember death”) tradition expressed these fears through the recurring motif of skulls and corpses—a grim reminder of the shortness of life, and, more positively, an incentive to “seize the day” and create a better world (Figure 2). 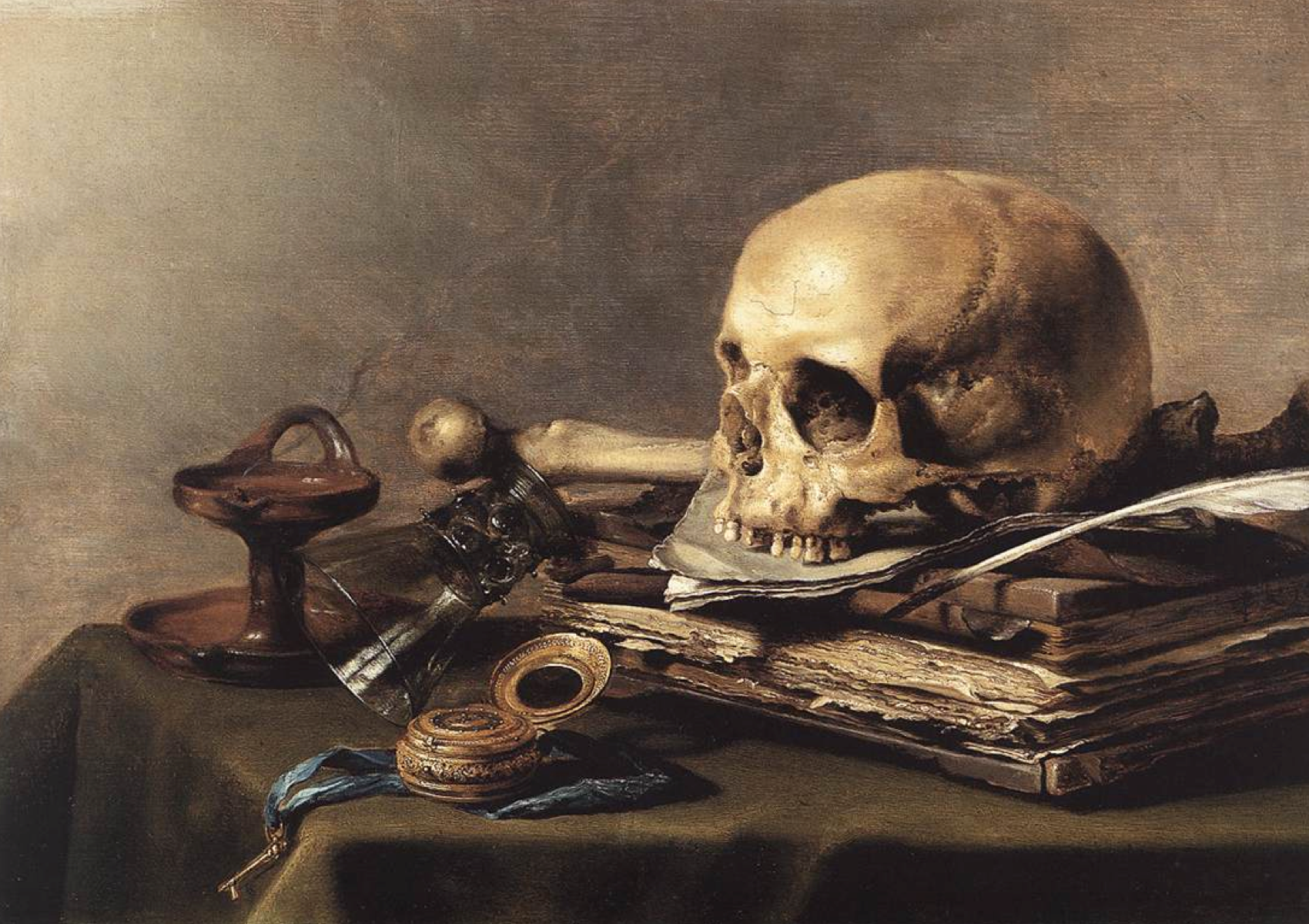 Art has also long played a role in helping populations come to grips with adversity. Pablo Picasso was fully aware of this power when he set to work on the mural that was to be his response to the fascist bombing of Guernica during the Spanish Civil War. He conceived the painting as nothing less than a weapon against the destructive political forces of the pre-World War II era, confiding to the artist Dora Maar, “I know I am going to have terrible problems with this painting, but I am determined to do it—we have to arm for the war to come.” As he worked on the piece, Picasso received many visitors who came to view his progress. This was unusual for him—while he generally did not like people watching him work, he wanted to publicize the creation of Guernica as his personal contribution to the antifascist cause, and as a testament to the capacity of art to respond to, and resist, threats to social stability (Figure 3).

In a similar vein, during the years of Soviet domination in Czechoslovakia (now Slovakia and the Czech Republic), musicians and writers inspired a movement that would culminate in the peaceful 1989 Velvet Revolution, which overthrew the Soviet regime and elevated the dissident playwright Václav Havel to the country’s presidency. In countries where authoritarian governments have not allowed such movements to develop, it is the arts world that has often kindled dissent, even under repressive circumstances. The US has seen many examples of arts-inspired social movements. In the 19th century, for example, Harriett Beecher Stowe’s book Uncle Tom’s Cabin would do much to catalyze support for abolition. Apocryphally, when Stowe was received by President Lincoln at the White House, the President, with the Union army in the field, reportedly said to her, “So you’re the little woman who wrote the book that started this great war.” Sometimes a single piece of art will inform multiple movements, over the course of decades. Woody Guthrie’s song “This Land Is Your Land” has been inspiring social change since its composition in the 1940s, from the Civil Rights movement to the recent protests against the immigration policies of President Trump. The music of Bob Dylan has had a similarly far-reaching effect.

In a more recent context—the HIV/AIDS crisis of the 1980s and 1990s—an artistic flourishing helped affected populations tell their stories to the wider world and forge the bonds of community that would lead to an anti-AIDS movement. From the poetry of James Merrill, to the plays of Larry Kramer and Tony Kushner, to dynamic visual pieces like Keith Haring’s1988 Silence = Death and the NAMES Project AIDS Memorial Quilt, founded by the activist Cleve Jones, the history of the AIDS crisis is also the history of a unique moment in American art.

Given the quickening pace of social and political change in recent years, and the link between art and the conditions that shape the health of populations, it seems to me that a robust engagement with the arts is all the more necessary if we are to meet the challenge that this moment presents. Our efforts on this front are all of a piece with the collective effort, frequently expressed through art, to better understand the conditions around us, so that we may work to create healthier populations.

Acknowledgement: I am grateful to Eric DelGizzo and to Professor Jennifer Beard for their contributions to this Dean’s Note.