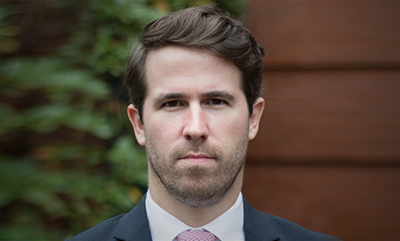 Michael Ulrich, assistant professor of health law, ethics & human rights, was selected to present his research on gun violence and public health law at the 2019 Health Law Scholars Workshop, sponsored by the American Society of Law, Medicine and Ethics and the Saint Louis University Law School Center for Health Law Studies. Ulrich and three other scholars presented their research at the workshop from September 12-14 at the Saint Louis University School of Law in St. Louis, Mo.

“It’s a really great experience to have your ideas challenged,” says Ulrich. “They want you to succeed but they also want to make sure that the things you’re putting out there are sound. It makes you question some of your assumptions—or even recognize the assumptions that you didn’t realize were assumptions.”

Ulrich’s paper, titled “Public Carry, Public Health,” applies the public health law framework he developed to a specific Second Amendment question—the right to carry firearms in public. He argues that legal analysis needs to balance an individual’s right to carry a firearm for protection with the state’s authority to limit individual rights to help reduce risk and protect public health and safety.

Similar to how policymakers treat vaccination rates as an issue of public health and safety, Ulrich says it could be worthwhile to view the issue of gun violence as a disease threatening the health of communities.

“If we had this contagious disease that was spreading, and more and more people were dying, people would be upset if the government didn’t step in to do something,” he says.

Ulrich hopes that by framing gun violence as a public health problem and bolstering the public health law framework, he can change how the legal field analyzes these laws and informs how policymakers think about laws that implicate Second Amendment rights.