Race, History, and the Science of Health Inequities 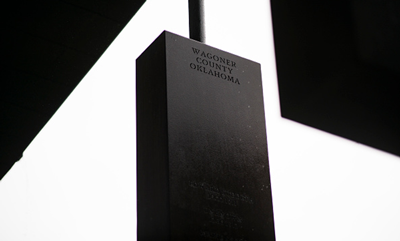 Markers display the names and locations of individuals killed by lynching at the National Memorial For Peace And Justice in Montgomery, Alabama. Conceived by the Equal Justice Initiative, the physical environment is intended to foster reflection on America’s history of racial inequality. (Photo by Bob Miller/Getty Images)

Health in America has improved significantly in the last century, with progress seen in a number of areas, such as life expectancy. In 1900, the average American could expect to live to about age 47. That number has since risen to nearly 79. This progress reflects generations of public health improvements, better living standards, nutrition, and sanitation. But this progress is not the whole story. Health gaps remain, notably between racial groups. The percentage of US adults 18 or older with diabetes, for example, is 15.1 percent for American Indian/Alaska Natives, 12.7 percent for Hispanics, 12.1 percent for black non-Hispanics, 8 percent for Asians, and 7.4 percent for white non-Hispanics (Figure 1). Black mothers are over three times likelier to die in childbirth than white mothers (Figure 2). And young African Americans are likelier than whites to die from a range of conditions that are typically more common at older ages, such as high blood pressure and stroke (Figure 3). While there has been progress towards closing some racial health gaps, they remain a persistent challenge for public health. 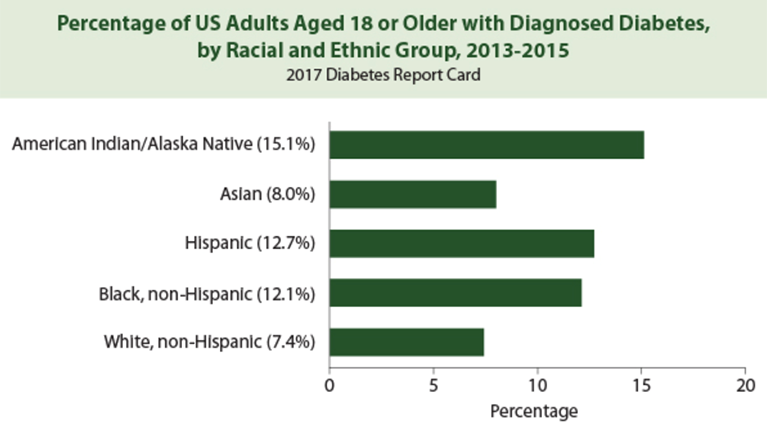 Figure 1. Percentage of US Adults Aged 18 or Older with Diagnosed Diabetes, by Racial and Ethnic Group, 2013—2015. From Addressing Health Disparities in Diabetes. Centers for Disease Control and Prevention website. https://www.cdc.gov/diabetes/disparities.html Accessed October 3, 2019. 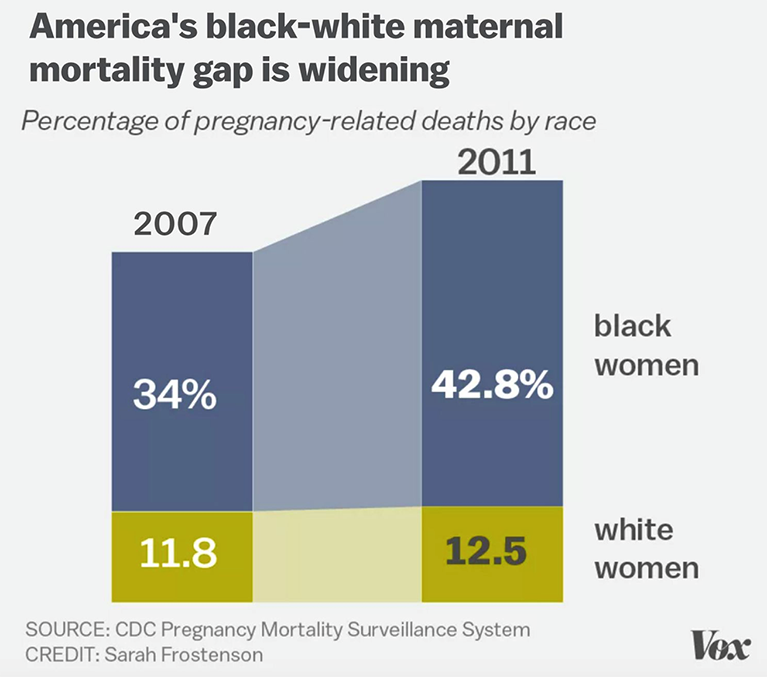 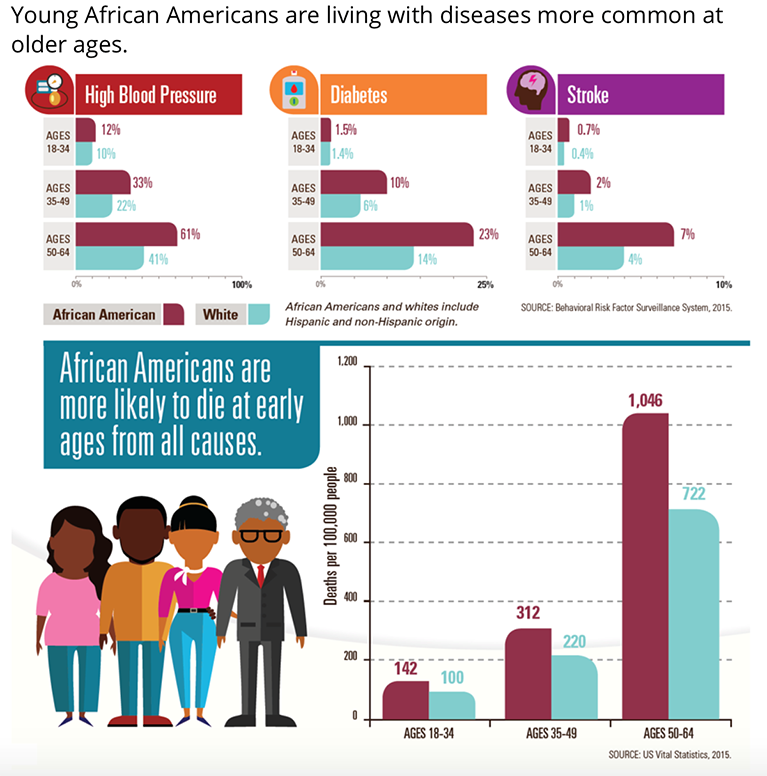 We have long known what causes racial health gaps. They are a product of the world around us. It is an unfortunate truth that our society is structured in a way that can deny minority populations, particularly black Americans, access to the resources that generate health. For example, African Americans have the highest poverty rate among racial and ethnic groups, at 27.4 percent, followed by Hispanics/Latinx at 26.6 percent, and whites at 9.9 percent. Just 57 percent of black students can access all of the math and science courses needed for college readiness. Black Americans are also likelier to live in segregated, economically disadvantaged neighborhoods—a consequence of generations of government policy and exclusionary urban design. Health is a product of these, and many other, factors. It is shaped by where we live, what we learn, the resources we can afford. Efforts to look elsewhere for the roots of racial health gaps have borne little fruit. By way of example, to put to rest one oft-stated misdirection on the topic, a 2015 systematic review examined genetic data from 2007 to 2013, to see if racial health disparities in cardiovascular diseases have roots in our DNA. It found little to suggest a genetic component to these gaps. This reinforces why we in public health must continue to advance a conversation about the true drivers of racial health gaps.

This conversation will be incomplete if it does not address the history that led to present conditions. A representation of this history can be found on the second floor of the Talbot Building, where we have displayed the 400 Years Timeline. This timeline is a history of America, including its history of slavery and oppression. By showing this past, the timeline shows how injustice shaped this country, and continues to do so, laying the groundwork for poor health. The legacy of slavery, especially, remains core to many present health challenges, undermining health through segregation, mass incarceration, and other pernicious influences. There are even patterns of present-day poor health which roughly match the geographic outlines of where slaves were imprisoned. For example, a high concentration of stroke mortality in the US, especially among African Americans, aligns with where slaves were concentrated in earlier eras—a haunting rejoinder to those who would dismiss history as irrelevant to contemporary life and health (Figure 4, 5). These stroke patterns also inform yet another racial health disparity—black Americans are at greater risk of stroke than any other group in the US; risk of experiencing a first stroke is about twice as high for blacks than for whites. 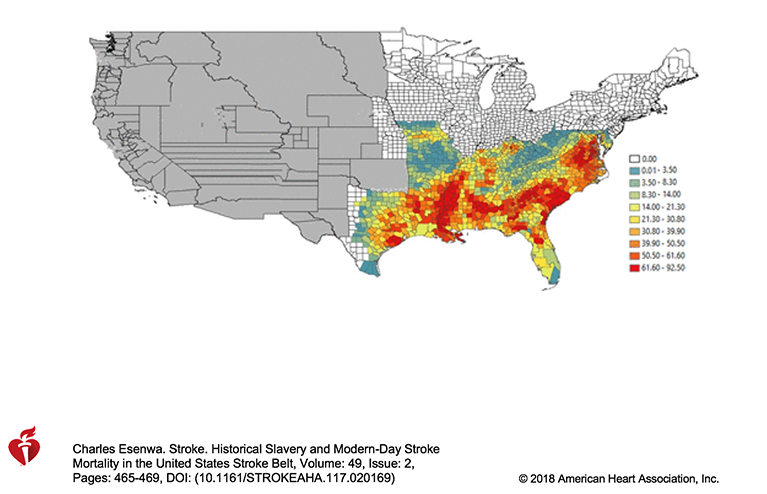 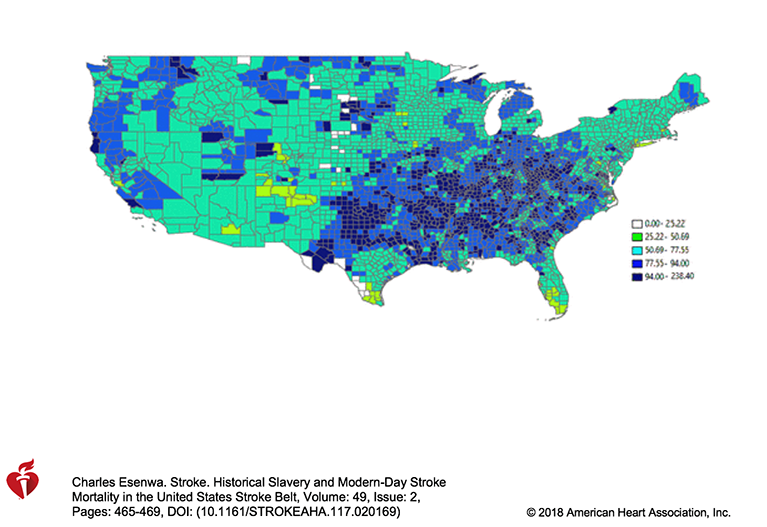 The through line of this history is an injustice that has kept this country from being fully well. We are starting to see an honest conversation about the extent and effects of this injustice, how it has warped our national project and undermined our health. Recently, this conversation has coalesced around the 400th anniversary this month of the first Africans brought to North America for enslavement. This was marked by the New York Times’ 1619 Project; it has also been the focus of 400 Years of Inequality, a national movement to observe this anniversary through a number of initiatives, including creating the timeline we now display. Acknowledging the historic injustice of slavery, and its ongoing effect on health, SPH will engage with this movement though a series of discussions and events. On October 18, we will host, “400 Years of Inequality: Breaking the Cycle of Systemic Racism.” This event, cohosted with the Howard Thurman Center for Common Ground, the Museum of African American History, and our Activist Lab, will address how the legacy of slavery shapes our present health, and how an awareness of this history can help us create a better future. The event will convene scholars and activists, including Cornell William Brooks, former NAACP President, and Neera Tanden, President of the Center for American Progress. Later, on November 6, we will welcome William A. Darity, Samuel DuBois Cook Professor of Public Policy at Duke University, to SPH, for a discussion about reparations.

Public health is about making the acceptable unacceptable. It is also about insisting, even when overall health improves, that a society where anyone is sick is a society that is not yet well. The historic injustice of slavery, and the systemic racism it engendered, is something we have long accepted in the US. This has informed health gaps that continue to hold us all back. Ending racial health inequities by making unacceptable the injustice that sustains them points to the core of our mission, reminding us to keep focus on the health of marginalized groups, with an eye towards improving the health of all.