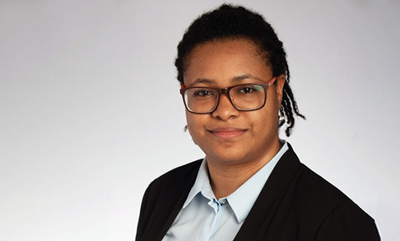 Vivien Solomon, a rising second-year Master of Public Health student at the School of Public Health, has won the Katherine Connor McLaughlin Award from the Boston University Women’s Guild (BUWG). Solomon was one of five recipients of the award at the organization’s Annual Lunch and Awards Presentation on May 23.

Since 1981, BUWG has presented the McLaughlin Award to support women ages 30 and older who are enrolled in BU graduate programs. Solomon says she is honored to receive the $750 scholarship from an organization that empowers women scholars, and she plans to use the award to support her academic studies at SPH, where she is completing certificates in epidemiology and biostatistics, and global health.

“I’m really interested in working with underserved populations, whether it’s with the elderly, homeless people, young adults, or people with HIV or cancer,” says Solomon, who has worked with nonprofit organizations such as Susan G. Komen and Project PinkBlue on evidence-based and culturally sensitive breast cancer interventions.

She also volunteers in an Activist Bucks reading club for homeless individuals to discuss short stories and poems, as well as any other thoughts on their minds. “People share parts of their lives with you, and it just puts a whole new perspective on life,” Solomon says.

Veronika Wirtz, associate professor of global health, and who nominated Solomon for the McLaughlin Award, says that Solomon is a highly motivated student who is passionate about global health.

“Vivien is not afraid to set ambitious goals for herself and take full advantage of the academic opportunities that the MPH program offers,” Wirtz says. “She is a student who sees the value in being a public health professional, not only from an academic perspective, but also in her service and engagement with the community.”

BUWG’s mission is to unite BU women in fellowship and enable them to serve the university effectively. The organization has awarded more than 200 scholarships to students from all BU schools and graduate programs. The scholarships have helped pay for tuition and research needs, as well as child care and treatment of serious chronic conditions.