White and Higher-Income Smokers More Likely to Switch to Vaping 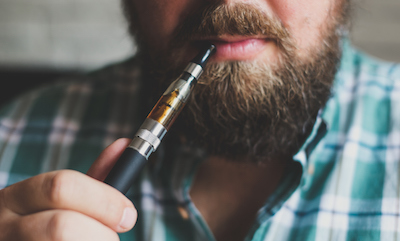 As the public health community debates using e-cigarettes, also known as vaping, as a less harmful alternative to smoking, a new study by School of Public Health researchers finds white and higher-income smokers are more likely to make the switch.

The study, published in Nicotine & Tobacco Research, found non-Hispanic white smokers were nearly four times more likely to switch exclusively to vaping than their non-Hispanic black or Hispanic counterparts, while higher-income smokers were twice as likely as lower-income smokers to switch. The researchers also found Hispanic and black smokers were twice as likely to believe e-cigarettes were more harmful than cigarettes, compared to white smokers.

“A lot of the focus with e-cigarette research has been around whether they can help smokers quit combustible cigarettes,” says doctoral student Alyssa Harlow, the study’s lead author. “But another important question is which smokers may be benefiting more from e-cigarettes as a harm reduction measure, and why?”

The researchers used data from the nationally-representative Population Assessment of Tobacco and Health (PATH) study, begun by the National Institutes of Health and the FDA in 2013. For the new study, the researchers looked at 6,592 adult participants who reported smoking and not vaping in the first wave of PATH between September 2013 and December 2014, and also responded to the second wave between October 2014 and October 2015.

In the second wave, 13.5 percent of the participants had begun vaping, with 91.3 percent of those who now vaped reporting that they also still smoked cigarettes. While there was no significant difference by socioeconomic status when it came to dual use of cigarettes and e-cigarettes, the researchers did find significant differences by race/ethnicity, with black and Hispanic smokers being less likely to vape at all than white smokers.

The researchers found significant differences in attitudes about smoking and vaping. Lower-income, black, and Hispanic participants were more likely than higher-income, white, and “other” race/ethnicity participants to report positive views of tobacco and believe most people and people close to them also had positive opinions of tobacco. Hispanic smokers were more likely than any other group to believe that most people disapproved of vaping, and black and Hispanic smokers were twice as likely as white smokers to believe e-cigarettes were more harmful than cigarettes.

“As currently being used, e-cigarettes may not be equitable in their role as a smoking cessation-aid, which could be for a variety of reasons, including attitudes around vaping, what type of vape product is being used, or it could relate to other financial or social barriers to quitting smoking,” Harlow says.

“The implications really point to health disparities, because we see socio-economic divides in who smokes cigarettes, and racial/ethnic differences in who is able to quit cigarettes. It’s important we consider this broader context when thinking about the public health impact of vaping as a harm reduction measure.”