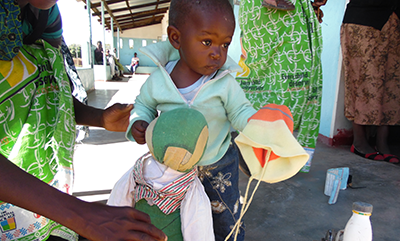 Research has shown early childhood interventions in the first 1,000 days of life may offset some negative impacts of adversity on child development, although the most effective ways to implement these interventions are unclear.

However, in a new study led by a School of Public Health researcher, parenting groups and development monitoring visits in the first years of life showed promise in growth and language acquisition in Southern Province, Zambia. The study, published in PLOS Medicine, found children who received the intervention showed significantly lower rates of stunting than the control group, as well as better language skills.

Rockers and his colleagues followed 526 pairs of children and their primary caregivers in 30 village clusters. All of the children were between 6 and 12 months old at the beginning of the study. The control group of 258 pairs received no intervention, while the other 268 were visited twice a month by a child development agent to monitor the child’s health for a year.

Caregivers in the intervention villages chose ”head mothers” from their communities, who were trained by the child development agents to facilitate twice monthly parenting group meetings and deliver a diverse parenting curriculum for two years.

After two years, the researchers measured stunting and five areas of neurocognitive development using the Bayley Scale for Infant and Toddler Development (BSID-III).

They found a dramatic effect on stunting, with 28.7 percent of the children who had received the intervention showing stunted growth, compared to 39.6 percent of children from the control group. The children from the intervention group also scored significantly higher on language development, but there was no significant difference between the two groups in scores of cognition, motor skills, adaptive behavior, or social-emotional development.

“In settings like Zambia, where optimal child nutrition and stimulation are often lacking, parenting groups hold promise for improving child health and welfare,” the authors wrote. “However, improvements in child development may not be immediate and continued and sustained efforts are likely needed.”

Davidson Hamer, professor of global health, was a co-author of the study. The other co-authors were: Arianna Zanolini of the American Institutes for Research–Zambia Office; Bowen Banda of the Zambia Center for Applied Health Research and Development; Mwaba Moono Chipili of the Department of Psychology at the University of Zambia; Robert C. Hughes of the United Kingdom Department of International Development; and Günther Fink of the Swiss Tropical and Public Health Institute.