Home » News & Events » Chronic Pain and the Health of Populations

Chronic Pain and the Health of Populations

It is with a heavy heart that this week we continued to see several natural disasters hitting the Americas. Hurricane Maria caused substantial damage in the Caribbean, including injuries and deaths. I have written about the potential consequences of the hurricane and the imperative for us to use this, and the other recent hurricanes, as a call to focus on prevention as a way to mitigate the consequences of these events. Meanwhile, we have seen an earthquake in Mexico that has affected the lives of thousands, and that will continue to affect the lives of those who were in the earthquake’s path. Local groups, including some of our students and alumni, have launched fundraising efforts to help those affected by the quake. While I normally do not highlight specific groups for donations after these events, I thought it worth highlighting our community’s involvement and the good work that civil society is doing in the face of this event. Our thoughts always are with those affected by these events and their loved ones.

On to today’s note. Globally, it is estimated that about one in five, or about 1.5 billion people, suffer from chronic pain (CP), with prevalence increasing with age. This average of about 20 percent is consistent with recent age-adjusted US estimates of CP (~50 million adults), while other estimates have placed the figure as high as 100 million. When we consider pain, most of us think of acute pain, which is a common and often-transient experience. CP is defined as pain that lasts more than 12 weeks and may arise without any initial injury.

Arthritis, nerve damage, and cancer pain are the leading causes of CP. Arthritic pain is the result of joint inflammation, and the US burden of arthritis, which has increased over the last decade, is projected to continue increasing as the population ages. Neuropathic pain is a complex type of CP that is associated with tissue injury and is usually caused by nerve damage, which can modify nerve structure and signaling function. Cancer pain is complex and arises from a mix of mechanisms—inflammatory, neuropathic, ischemic, and compression-based. Unlike many other types of chronic pain, cancer pain often tends to progress.

CP is linked to lower quality of life and increased healthcare costs. Findings from the Global Burden of Disease Study place CP conditions among the top contributors to years lived with disability (YLD) globally (see Figure 1). Among the types of chronic pain, low back pain is in 1st place, with neck pain coming in 4th and osteoarthritis coming in 13th, with each contributing about 50 percent to 75 percent in mean YLD quantity between 1990 and 2013. 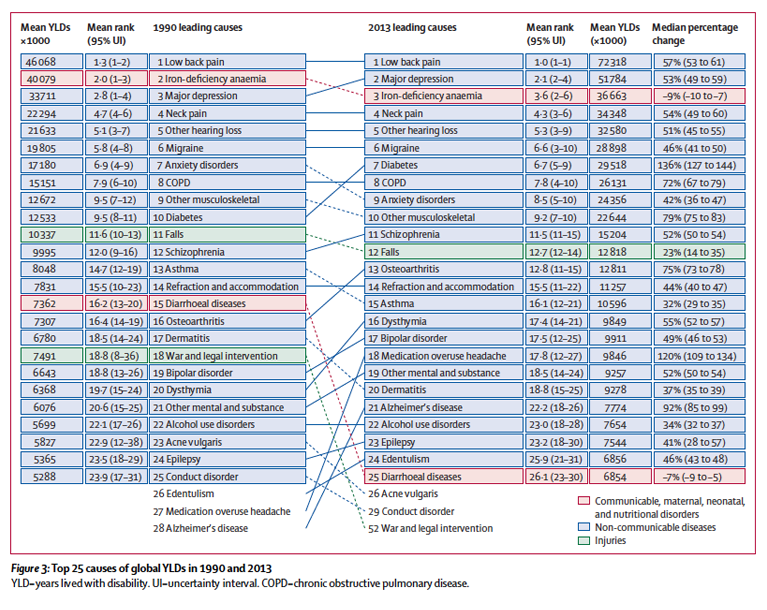 Despite the high prevalence of CP, pain is often forgotten or neglected, while conditions like depression (number two in global YLD), anxiety (number nine in global YLD), diabetes (number seven in global YLD), and COPD (number eight in global YLD) are now increasingly considered important targets for public health action. US rankings of top YLD contributors are similar to global rankings, and, as demonstrated in Figure 2, pain conditions in the US contribute to YLDs at a proportion comparable to that of mental health and substance use disorders. Yet relatively little attention is paid to the need for proper pain management interventions. For example, only about one in two cancer patients receives adequate pain relief. 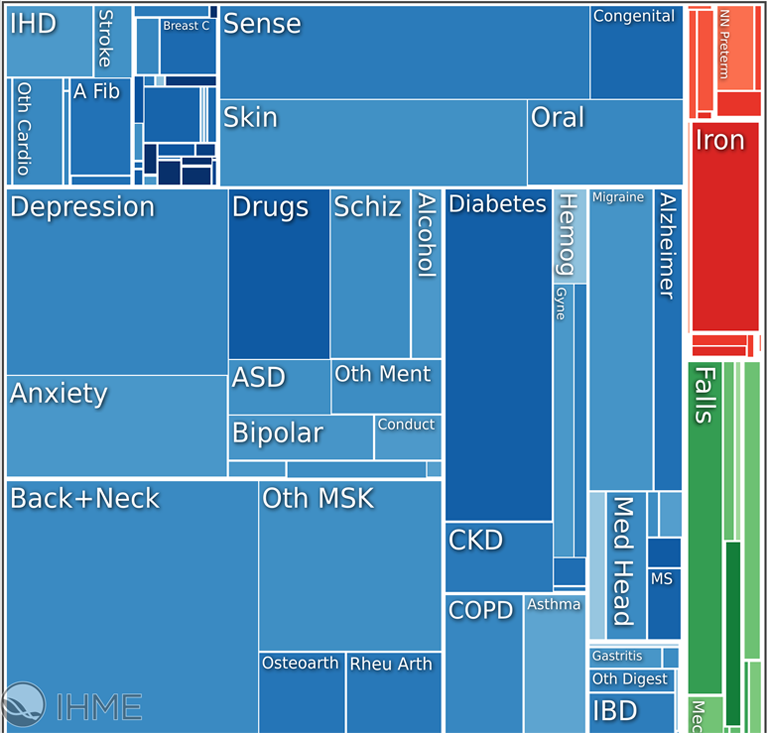 Figure 2. Square Box Chart of Causes of Years Lived with Disability in the US, 2015—pain conditions highlighted with an orange box.
Generated with the Institute for Health Metrics and Evaluation’s GBD Compare Visualization.

Sleep disturbance, depression, and fatigue are common and mutually reinforcing problems for people with CP. People with CP often suffer from difficulty falling and staying asleep, and from low-quality sleep, with a risk of sleep disturbance that is two to five times higher than those without CP. At the same time, CP patients with sleep disturbance reported higher pain intensity and disability. Low-quality sleep clearly results in exhaustion and fatigue; being fatigued can, in turn, make pain more difficult to manage. Patients with CP also experience high rates of major depressive disorder (25 percent to 40 percent), which includes insomnia as a symptom. Together, sleep disturbance, depression, and fatigue remain a challenging constellation of symptoms among CP populations, and are associated with greater healthcare use and decreased quality of life. In addition to staggering medical costs, CP is also associated with lost productivity, including missed days from work and lost wages. Overall, chronic pain remains a significant public health problem, costing society at least $560 to $635 billion annually (in 2010 dollars) with nearly equal contributions from lost productivity and treatment costs. Figure 3 provides a display of the broad range of consequences associated with CP.

Pain and access to effective treatments are distributed unequally worldwide, with a greater burden and less access to care among socioeconomically disadvantaged groups. Race, for example, is a social dimension that is associated with under-treatment. In particular, in the US, African Americans and Latinos are generally undertreated for pain compared to white Americans. These disparities persist across types of chronic pain and treatment settings, throughout the lifecourse. They appear to be on average greater, more widespread, and more persistent for African Americans than for Latinos. Amazingly, one study found that half of medical students and residents endorsed false beliefs about higher pain tolerance among black patients. Predictably and unfortunately, endorsements of those beliefs were, in turn, linked to lower ratings of pain for, and undertreatment of, black patients. Taken together, these studies powerfully show that the pain of populations of color, compared to white populations, is likelier to be underestimated and undertreated. The differential burden of pain by SES can be seen in Figure 4, wherein there is a clear monotonic decrease in pain burden going from left to right, from most to least impoverished. Beyond burden and treatment access, lower SES is also linked to higher pain intensity and greater likelihood of disability.

Treatment of Chronic Pain and its Unintended Consequences

Current treatment options for CP include physical therapy and pharmaceutical approaches, including opioids, non-opioid analgesics, antidepressants, and anti-seizure medications. Treatment for cancer-related pain often includes opioids, as outlined in the WHO analgesic ladder, and may need to be adjusted frequently given disease course and progression. Opioid use for non-cancer CP remains controversial given its high abuse potential and the magnitude of the current opioid crisis. The CDC Opioid-Prescribing Guideline makes clear that opioids should be used judiciously for chronic pain treatments. Certain antidepressants and anti-seizure medications may also help control chronic neuropathic pain. Physical therapy, including physical activity, is another effective approach to pain management, but remains underutilized relative to medication-based treatments.

An additional word on opioids. As we all know, we are now nearly two decades into an opioid epidemic. In 2013, approximately one-quarter of a billion opioid prescriptions were written in the US—enough for every adult resident. As reflected in Figure 5, this epidemic of opioid overdose deaths unfolded along with a concurrent and parallel increment in opioid prescriptions for treatment of chronic, non-cancer pain. In response to the epidemic, strong restrictions have been placed on opioid prescriptions. In 2016, the CDC’s opioid prescription guideline suggested that opioids should not be used for first-line therapies for CP not related to cancer, and should instead be reserved for active cancer and end-of-life care. The guideline encouraged physicians to use non-opioid therapies or use the lowest effective opioid dosage if opioid-based approaches are needed. 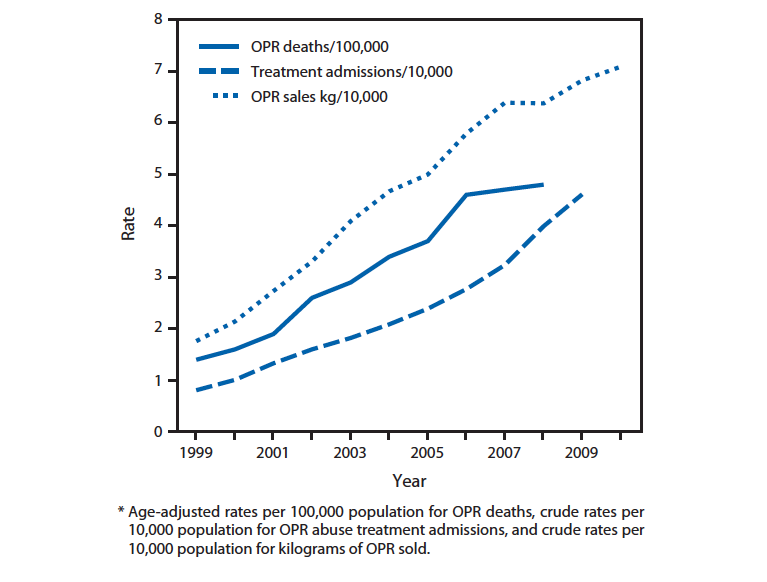 Despite its enormous impact both globally and in the United States, CP continues to be regarded as a medical problem and has yet to gain much traction as an issue worthy of population health concern. One of the main obstacles to addressing CP is the widespread view of it as a symptom rather than a disease in its own right. To my mind, CP represents a valid population health priority, one that embeds socioeconomic structures and inequities, and one that is highly prevalent and debilitating. Recognition of the burden of CP, reengineering CP treatment systems to ensure that they reach underserved communities including people of color and low SES, re-educating medical professionals to prevent racialized CP treatment approaches, and implementing effective multi-modal therapeutic regimens that will reduce the potential of opioid dependency would all be components of a population health approach to CP.

Acknowledgement: I am grateful to Salma Abdalla, MD, MPH, Gregory Cohen, MPhil, MSW, and Shui Yu, MA, for their contributions to this Dean’s Note.