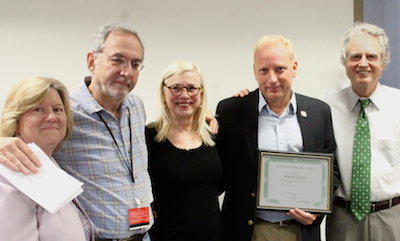 Anthony Hardie was presented the 2017 David Ozonoff Unsung Hero Award by Roberta White, professor and former chair of environmental health, at a party in the department on June 2.

Hardie is the national chair of Veterans for Common Sense, and chair of the Department of Defense’s Gulf War Illness research panel, a congressionally-mandated research program.

A veteran of the 1991 Gulf War, Hardie suffers from Gulf War Illness (GWI) and is an advocate for other veterans suffering from the disorder, which affects about one-third of the 697,000 veterans of that war. The illness was caused by a combination of chemical exposures during the Gulf War, according to a large body of research that includes major contributions by White and Kimberly Sullivan, assistant professor of environmental health.

Hardie has worked on behalf of veterans in multiple roles since his military service, including with numerous veterans’ service organizations and federal advisory committees, as a congressional staff member, and as executive assistant for legislative, public, and intergovernmental affairs at the Wisconsin Department of Veterans Affairs. White and Hardie met when they both served on the VA’s Research Advisory Committee on Gulf War Veterans’ Illnesses (RAC).

“I truly admire his character and achievements, and I value his friendship very much,” White said. “Anthony has amazed me with the breadth of his scientific knowledge, the sharpness of mind that he brings to reviews, and his capacity to see the main point, to advocate for what we really need to advance the science, to inaugurate research that will lead to translatable clinical findings on the treatment of Gulf War Illness, and to alleviate the suffering of veterans.”

Hardie said he was honored to receive the award, but especially grateful for the work of researchers like White, Sullivan, and their colleagues. “A hard battle, and the only battle that we won as Gulf War veterans regarding government acknowledgement of chemical exposures, was to get acknowledgement of the chemical exposures that we had following the demolition of the Iraqi munitions bunker at Khamisiyah,” he said. “For those reasons and all your work on combinations of exposures, I just want to thank all of you for the work that you do.”

Also speaking at the event was James Binns, former principal deputy assistant secretary of defense and former RAC chairman during Hardie and White’s time on the panel.

The event also marked White’s stepping down as chair of environmental health. Her predecessor, Ozonoff, spoke about White’s leadership in the department, as did Jonathan Levy, professor and current environmental health chair ad interim, and students and staff.