High Risk of Death Found in Children with Undiagnosed Tuberculosis 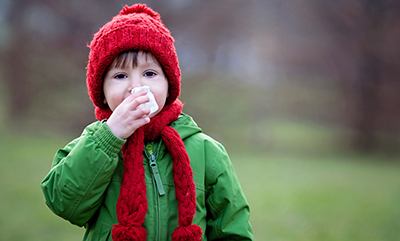 About 1 million children worldwide develop tuberculosis disease each year, but an estimated 640,000 of them are never diagnosed or treated.

Among those undiagnosed cases, a significant percentage of children younger than age 5 may die, suggesting a “worrisome, unrecognized global burden of childhood mortality” that points to the need for better diagnostic testing and early detection, says a study co-led by a School of Public Health researcher.

The study, in The Lancet Infectious Diseases, attempts to shed light on the hidden population of children with tuberculosis who die without receiving treatment. The research team analyzed past studies on tuberculosis to quantify the mortality impact of the “global failure” to diagnose and treat the disease in young children.

The authors found that, before the widespread availability of tuberculosis treatment, about one in five affected children—and 44 percent of children under age 5—died. Fatality rates among children with HIV, even those who received anti-tuberculosis treatment, were substantially higher. The researchers noted that the 44 percent mortality rate among young children in the “pre-treatment era” was much higher than the death rate of about 2 percent of children under age 5 today who receive treatment.

“Our findings point to a large and invisible burden of preventable child deaths related to tuberculosis, particularly in areas with uncontrolled tuberculosis transmission where children have poor access to appropriate care,” the study says.

“In the absence of sensitive diagnostic tools, the most important strategies that programs can deploy are empirical treatment of young children in whom tuberculosis is clinically suspected, and extensive use of preventive therapy in vulnerable children in close contact with an infectious case of tuberculosis,” the researchers write.

The study was led by Helen Jenkins, an assistant professor of biostatistics, and Courtney Yuen, an instructor in global health and social medicine at Harvard Medical School. Other contributors were from Brigham and Women’s Hospital; Beth Israel Deaconess Medical Center; Stellenbosch University in Cape Town, South Africa; and the University of Sydney in Australia.

Funding came from the National Institutes of Health and Janssen Global Public Health.