Home » News & Events » Gender Equity and the Health of Populations

Gender Equity and the Health of Populations

I wanted to comment today briefly on the role of gender equity as a fundamental concern for population health. Two factors prompt today’s note. First, the US Supreme Court has reopened the question of abortion rights for the first time in almost a decade, through hearing Whole Women’s Health v. Hellerstedt , a case that revisits the undue burden standard set in Planned Parenthood v. Casey. Second, Tuesday, March 8, is International Women’s Day 2016, with a theme “Planet 50:50 by 2030: Step it up for Gender Equality.” Both these events conspired this week to elevate the issue of gender equity in my thinking, and to prompt me to write briefly on gender equity and its role in population health scholarship and practice.

Starting with population health, in an upcoming book co-authored with my colleague Katherine Keyes, I define population health as “the study of the conditions that shape distributions of health within and across populations, and of the mechanisms through which these conditions manifest as the health of individuals.” This definition reflects both a concern with improving overall population health and also with the distribution of health within populations. Centrally, concerning ourselves with differences within populations can teach us about disparities in the lived experience, which translate into health gaps. A lens on gender equity similarly illuminates foundational inequities in the social, political, and economic structures that shape all our lives.

First, let me dispense with a false road to the topic. Comparisons in overall health between women and men provide a rather inadequate snapshot of gender health inequalities. Women have lower mortality rates than men on a broad range of causes of death, and life expectancy for women is higher than it is for men worldwide. Conversely, globally, women face higher rates of disability adjusted life years (DALYs) due to several particular conditions such as depression and anxiety disorders, breast cancer, and migraine relative to men. This approach rests on comparisons around dimensions of health equality.

A much more important approach considers equity, rather than inequality. A health equity approach is concerned with health gaps that are patterned by social, economic, and cultural gaps between groups. As defined by Paula Braveman and Sofia Gruskin, “equity in health is the absence of systematic disparities in health (or in the major social determinants of health) between groups with different levels of underlying social advantage/disadvantage—that is, wealth, power, or prestige.” Unfortunately, there are ample drivers of gender inequities worldwide.

A multilevel framework can be a useful approach to consider the factors that influence gender equity, and drive health inequities by gender, across levels of influence.

Starting from more fundamental and proximal factors, in the report Unequal, Unfair, Ineffective and Inefficient—Gender Inequity in Health: Why It Exists and How We Can Change It, Gita Sen and colleagues discuss the concept of gender as a “social stratifier,” noting: “Girls in some contexts are fed less, educated less, and more physically restricted; and women are typically employed and segregated in lower-paid, less secure, and ‘informal’ occupations.” This statement of course highlights the central role of fundamental causes of disease and disability, capturing the challenge that factors such as education and employment are unequally and disproportionately distributed between women and men worldwide. There is ample illustration of the persistence of the gender wage gap in countries worldwide, and equally abundant evidence about the relationship between income and a range of health indicators, from mental health to physical health.

The Millennium Development Goals Report 2015, commenting on MDG goal three (that aims to promote gender equality and empower women) readily illustrates how far we still have to go to achieve gender equity in education. As shown in Figure 1 below, gender parity has been achieved for primary education in two-thirds of low-income countries, while disparities in secondary and tertiary education persist more widely. In addition, approximately half of women participate in the global labor force, as compared to 76 percent of men. 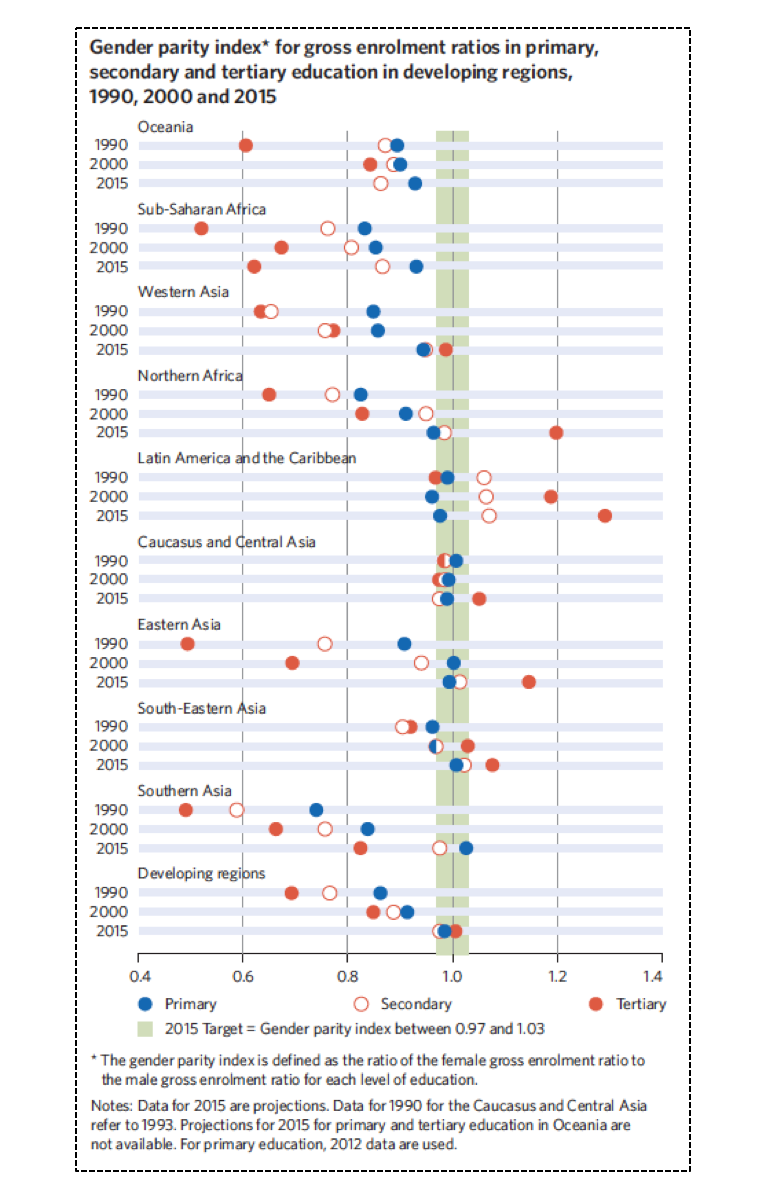 Moving on to more mezzo-level factors, access to appropriate health services, particularly specialized reproductive care, is a driver of women’s health. I have previously commented on the threats to reproductive health in the US, and I opened this note with reference to the upcoming Supreme Court case. The fifth Millennium Development Goal (MDG 5) included the reduction of the maternal mortality ratio by 75 percent between 1990 and 2015, and universal access to reproductive health care by 2015. While a 44 percent drop was seen globally in the maternal mortality ratio, only nine countries met the 75 percent goal. Furthermore, while overall gains toward universal reproductive health have been achieved, only about half of pregnant women in developing regions have appropriate access to reproductive care. Disparities by urban vs. rural status, as shown in Figure 2, further demonstrate the role of economic development and health equity. Much work remains to be done on maternal and reproductive health throughout the world, particularly in low-income countries, although it is worth noting that reproductive rights remain under assault in high-income countries, including our own. 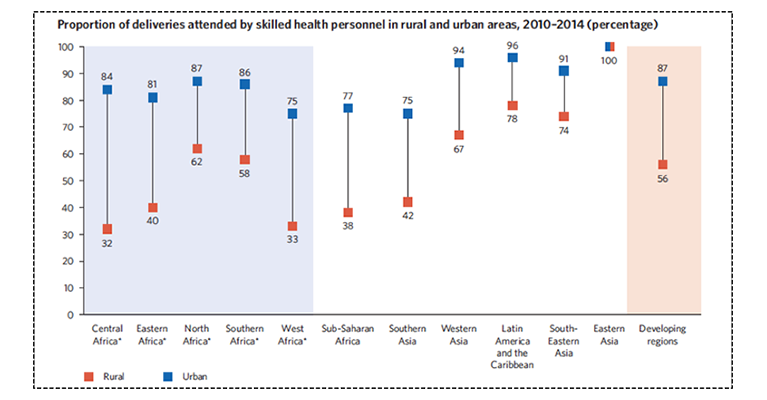 It is unfortunately the case that policies that aim to level the gender playing field are sorely lacking in many countries worldwide, and particularly and glaringly missing in the United States.

A forward-looking approach to gender equity therefore should aspire to tackle the structural drivers of gender inequities in health, matching at core the aspirations of public health.

To guide future policy and practical action on gender equity, the World Health Organization (WHO) released a report titled “Roadmap for Action, 2014-2019: Integrating Equity, Gender, Human Rights and Social Determinants into the Work of WHO.” The roadmap has three main directions to guide the adoption of this mission. Broadly, the document suggests the need for elevating gender-responsive action that addresses the social determinants of health, the collection of data that can adequately document health gaps to the end of correcting them, and the development of approaches that advance health equity within a human rights framework. I note that the latter reflects a note about the importance of adopting a health and human rights framework as part of a forward-looking public health agenda in a recent Dean’s Note. While these directions are intended for WHO organizations, they clearly have broad institutional relevance and appeal and can serve as a reasonable rallying cry for much work in the area, across sectors.

In closing, I should also note briefly that gender equity affects both the health of of women and also of their families, social networks, and children, resulting in intergenerational effects that have health consequences that far outlast the present social, economic, and political circumstances that shape gender equity today.

Within the academic community, we clearly have a particular responsibility to tackle health inequity of all kinds. A concern with gender inequity calls for an effort to produce the scholarship that both documents the mal-distribution of health across genders, and the mechanisms that explain the production of gender inequities. It also calls for education that keeps inequities at the core of what we teach, and how we teach our students to approach their engagement with population health going forward. And, it suggests a relentless focus on efforts to translate our science, to make the case repeatedly for the centrality of equity to all public health considerations and the inevitable imperative that presents to tackle the foundational drivers of health.

Acknowledgement: I am grateful for the contributions of Greg Cohen, MSSW, and Catherine Ettman to this Dean’s Note, and to Isabel Tess Galea for extra motivation.