In the first part of this Dean’s Note, I suggested that a life course perspective can be a useful and essential organizing approach for population health science. I have, in previous work, suggested that life course approaches and multilevel approaches may be the two most important paradigmatic shifts in population health science in recent decades. Building then on the first part of this note, here I comment on multilevel approaches.

A multilevel approach to population health is predicated on the understanding that exposures at many levels of organization work together to produce health outcomes. These exposures are positioned both up and downstream of individual-level risk factors [see Figure 1] and include determinants of population health that are social, biological, geographic, political, and temporal in nature.

Therefore, a multilevel approach teaches us to ask how it is that social relationships produce health behaviors that in turn may result in pathophysiologic manifestations of disease. A multilevel question might ask what the consequences are of lifting a law requiring motorcycle helmet use on head injuries in a particular state. This, of course, is in contrast to a “single-level” question that rests on individual associations and that would ask what the relationship is between an individual wearing her helmet and her risk of head injury.

A multilevel framework provides us with an opportunity to ask questions that extend our analytic lens beyond individual experience to a fuller appreciation of the levels of influence that plausibly shape the health of populations, all to the end of understanding what might indeed matter most and what might be useful levers of influence in our goal to improve population health.

To illustrate the potential role of multilevel thinking on our understanding of health in populations, let me comment briefly about coronary heart disease (CHD), the leading cause of death in the United States (610,000 per year), responsible for approximately one-quarter of all annual deaths. CHD has largely been studied in relation to diet, physical activity, and smoking, each critical and modifiable factors that are indeed associated with CHD. Yet, if we focus only on these exposures, we risk confinement to the proximate prison of risk-factor epidemiology, missing the levers of public health impact that lie at “higher” levels of organization. In the last two decades, the study of CHD has extended to neighborhood-level social environment. For example, socioeconomic environment is associated with CHD incidence, with greater neighborhood disadvantage predicting higher incidence, beyond individual risk factors, among both blacks and whites. Work led by SPH Professor Yvette D. Cozier and conducted with SPH colleagues Julie R. Palmer, Lisa Fredman, Lauren A. Wise, and Lynn Rosenberg demonstrated that neighborhood median housing value in particular is inversely related to hypertension (a risk factor for CHD) among black women, independent of individual level risk factors. Similarly, neighborhood-level social capital is a predictor of CHD mortality. Therefore, the drivers of CHD rest both at the individual level and the group level, being well in line with a multilevel perspective on the production of population health.

Importantly, multilevel perspectives do not simply “add” isolated “risk factors” at other levels of influence to our prediction models. Multilevel frameworks should allow us to examine the interface between levels and quantify interactions across levels, and there is an established literature on theoretic and statistical considerations in appropriately modeling clustered or nested observations (e.g. people within neighborhoods).

Extending the CHD example, from 1979 through 2009, CHD mortality declined by 66 percent among men and 67 percent among women [see Figure 2]. However, these general gains mask differences by race, which emerge clearly in Figure 3, showing that despite the overall reduction in CHD mortality, the rates for African American men and women remain disproportionately highest relative to other race/gender groupings. 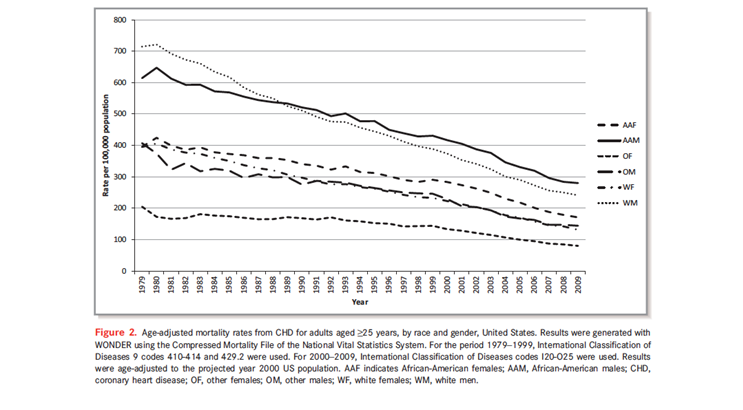 Why would this be?

Extending a multilevel lens, an exploration of the geographic differences in disparities in CHD by race shows that while mortality is higher for blacks than whites at any level of urbanization, there are substantial regional differences by race. For example, among blacks in the US in 2009, the highest rate of CHD mortality was found in Midwest rural areas (231 per 100,000), while the lowest rate was found in Northeast rural areas (147 per 100,000). In contrast, among whites, the highest rate of CHD mortality was found among large metro areas in the Northeast (192 per 100,000), while the lowest rate was found in medium metro areas in the West (134 per 100,000). Could “higher-level” group determinants of CHD, then, better explain racial differences in CHD? A geographically weighted regression approach demonstrated that geographic heterogeneity in black–white differences in CHD mortality was attributable both to poverty and segregation. After controlling for poverty, segregation was positively associated with CHD for blacks in some counties and negatively associated with CHD in others, suggesting that its significance differs by place. Variation in features of the built environment, including walkability and air pollution, are also jointly associated with CHD mortality. Thus, in addition to approaching racial disparities in CHD by promoting equal access to quality health care, we would also do well to consider economic deprivation and segregation as key targets of study and intervention. Encouragingly, a recent commentary by NYC Health Commissioner Mary Bassett, “#BlackLivesMatter—A Challenge to the Medical and Public Health Communities,” calls on clinicians and researchers to contribute to the reduction of interpersonal and institutional discrimination, factors at multiple “levels” that likely will continue to contribute to substantial racial disparities in health.

This illustration demonstrates how an exploration of influences at multiple levels can shed light much more comprehensively on the determinants of population health than can a focus on single levels alone. This approach is rapidly gaining currency and broader acceptance. On the example of CHD, echoing this approach, the 2010 Institute of Medicine report Promoting Cardiovascular Health in the Developing World emphasized the need for a multilevel approach to CHD promotion [see Figure 4]. 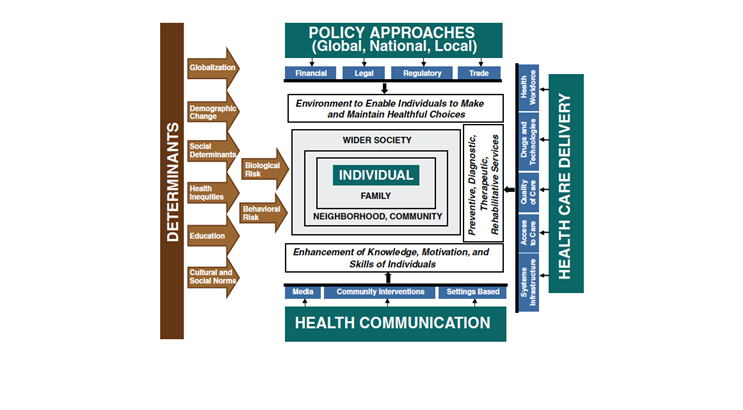 Coming back then to life course and multilevel perspectives together, both approaches provide organizing principles that can guide our analytic and conceptual work in public health. Both can help frame the questions we ask and, hopefully, guide us to the production of more useful knowledge. And both, when put together, demonstrate the complexity of population health extending well beyond a deterministic approach that suggests a particular health behavior is the central factor responsible for health outcomes in populations. This clearly has implications for our scholarship, but also for our educational programs and for the practice of public health as a whole.

Acknowledgement. I would like to acknowledge the work of Gregory Cohen, MSW, on this Dean’s Note and the first Dean’s Note in this series.