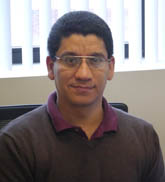 A major interest of Dr. Ruiz-Narváez’s research is the elucidation of the genetic basis of human complex diseases, as well as the integration of the assessment of gene-environment interactions to uncover potential mechanisms of development of disease. Dr. Ruiz-Narváez’s past research has involved the study of genetic variation on genes involved in lipid metabolism to assess whether naturally occurring variation interacts with dietary intake and other life-style factors to affect risk of cardiovascular heart disease (CHD). His current research, as part of the team of the Black Women’s Health Study, involves the finding of genetic variation associated with risk of different diseases/phenotypes such as breast cancer, obesity, and type 2 diabetes. His current genetic research seeks to elucidate how variants in genes expressed in the neuroendocrine system interact with non-genetic factors in relation to risk of obesity and type 2 diabetes. Dr. Ruiz-Narvaez also has a special interest in new approaches to understand how use of gene regulatory regions may affect phenotypic traits. He recently proposed the hypothesis about the existence of inter-individual variation in the use of alternative regulatory regions (e.g., gene promoters and enhancers), and how this new source of variation may hide genetic effects on complex phenotypic traits.