Glucose-6-Phosphate Dehydrogenase Modulation of Endothelial Function in Sickle Cell Disease
Individuals with sickle cell disease have been shown to have endothelial dysfunction. While this has been attributed to decreased bioavailable nitric oxide (NO) owing to hemolysis, endothelial dysfunction could result from an aldosterone-mediated decrease in glucose-6-phosphate dehydrogenase (G6PD) activity. G6PD, the first and rate-limiting enzyme of the pentose phosphate pathway, is the principal intracellular source of NADPH, which serves as a reducing equivalent and a cofactor for the endothelial isoform of nitric oxide synthase. In this manner, G6PD regulate 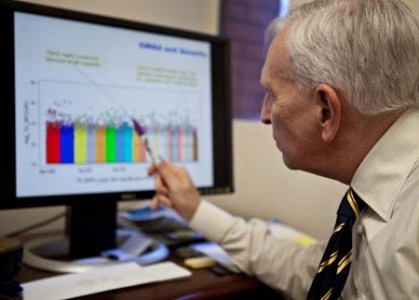 s endothelial function by modulating cellular redox state and NO production. In sickle cell disease, systemic dehydration due to renal dysfunction is a common; (sub)acute or chronic dehydration activates the renin-aldosterone system and clinical studies have shown that patients have elevated levels of renin and aldosterone. Hyperaldosteronism has been associated with endothelial dysfunction and aldosterone decreases G6PD expression and activity in endothelial cells in vivo, resulting in increased oxidant stress, decreased bioavailable NO, and impaired vascular reactivity. Drs. Jane Leopold and Joseph Loscalzo are investigating the hypothesis that endothelial dysfunction results from an aldosterone-mediated decrease in G6PD activity. It is proposed to: 1) examine the molecular and cellular mechanisms by which an aldosterone-mediated decrease in G6PD activity influences endothelial cell function under steady-state, acute hypoxia, and dehydration conditions in cells isolated from mouse models of sickle cell disease and G6PD deficiency; 2) determine the functional consequences of decreased G6PD activity in sickle cell disease by evaluating indices of oxidant stress and bioavailable NO, in the presence or absence of cell-free hemoglobin; 3) examine the efficacy of eplerenone, an aldosterone antagonist, or G6PD overexpression in improving endothelial function in vitro, and; 4) confirm these findings in vivo under steady-state, acute hypoxia, and dehydration conditions by examining endothelial function, NO bioavailability, oxidant stress and vascular reactivity in mouse models of sickle cell disease and G6PD deficiency. The findings of this study could suggest further that aldosterone antagonists, such as eplerenone, or interventions to increase G6PD activity, may have therapeutic benefit.

Sickle Cell Scholar
Dr. Hong-yuan Luo diagnosed a family in whom the father and one son had moderately elevated Hb F levels. Both father and son were found to have a novel T>G transversion at nt (nucleotide) -567 of the HBG2 promoter. This mutation alters a GATA-1 binding motif to a GAGA sequence. DNA-protein binding assays showed that this GATA motif is capable of binding GATA-1 transcription factor in vitro and in vivo. Truncation analyses of HBG2 promoter linked to a luciferase reporter gene transfected in erythroid cells revealed a negative regulatory activity present between NT -675 and -526. The T>G mutation at the GATA motif increases the promoter activity by 2 to 3 fold. The binding motif is uniquely conserved in simian primates with a fetal pattern of g-globin gene expression. Taken together, these results indicate that the GATA motif at nt -567 has a functional role in silencing HBG expression in adult. The T>G mutation in this motif disrupts GATA-1 binding and the associated repressor complex, abolishing its silencing effect and resulting in the up-regulation of HBG expression in adult. Increased fetal hemoglobin production in adult can ameliorate clinical severity of sickle cell disease and b-thalassemia major. Thus, understanding the regulation of HBG expression and its silencing in adult has potential therapeutic implications.