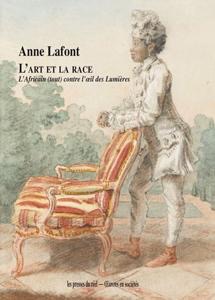 In 2017, Anne Lafont boldly pointed out that art history, as the study of the visual, is a “remarkably efficient tool” for studying race as a construct likewise rooted in the visual.1  With her 2019 book L’art et la race: L’African (tout) contre l’œil des Lumières, Lafont demonstrates both how right she was and just how much more work there is to do.

In the introduction to her book, Lafont poses the question of how to address the development of the image of the African over the long eighteenth century—a topic as large, important, and difficult as that of the depiction of race. This book is intended to address this topic, primarily though not exclusively in the French context, in order to both to bring to the fore images of Black people in the long eighteenth century and to discuss how these images and objects contributed to ideas about race during a time when race as a function of physical appearance was unstable.

Lafont argues that her first chapter necessarily addresses whiteness because whiteness also existed as a race. Furthermore, in the eighteenth century, the increasing awareness of race created a great imperative to depict racial whiteness, most clearly expressed in the portraits of white women accompanied by Black slaves. At the end of the seventeenth century and beginning of the eighteenth, whiteness had to be actively performed. However, Lafont devotes most of her attention in this chapter to images of Africans with white skin who captivated Europe: those with vitiligo and albinism. For Lafont, the images of these people are more interesting than those displaying the whiteness of white Europeans precisely because Europeans understood Africans with vitiligo or albinism as proof that whiteness was the “true” color of humans and thus blackness was a stain, which marked Africans as less than white humans. Lafont also considers how paintings and prints depicting these people focus on women and on the depiction of their bodies as curiosities.

Lafont’s second chapter focuses on the collaboration of the visual arts with the sciences and the study of humans in the last decades of the eighteenth century and during the first half of the nineteenth century. Lafont argues that the images that accompany the works of these anthropologists are more telling of their theory and had a stronger effect on society than their texts. She focuses on Camper, both because he believed in monogenesis (a single origin for all humans) and because he was a trained artist, doctor, and anatomist. His drawings, Lafont argues, set the standard for the anthropologists to come with their use of “scientific” methods and calculation. She also argues that Camper is the visual origin for the neoclassicism of the 1790s and early 1800s, drawing a particularly effective line between Camper and Flaxman. The rest of her chapter focuses on anthropologists in the first half of the nineteenth century and the desire to construct race through the skeleton, in addition to other physical traits. She argues that the anthropological theorization of how to measure race and record it visually was central to how race was depicted in art, and she refers to the influence of anthropological theory on art in later chapters.

Lafont’s third chapter considers the construction of blackness in portraiture. Although portraits of Black people were quite unusual at this time, Lafont highlights one pastel painting and one sculpture from 1741 and 1761 respectively, both of which were made also as portraits of their white slaveowners. For each object, Lafont discusses the history of the family and the model and analyzes the image of the Black slave in contrast to that of the white owners. Lafont contends that these unusual portraits provided the artists with an opportunity to play with portraiture, as they were not beholden to a patron, which resulted in more intriguing objects than the corresponding portraits of their white slaveowners. Lafont concludes this chapter with Girodet’s Portrait of Jean-Baptiste Belley (1797), which for this reader was a refreshing discussion of this painting that is often favored in discussions of race in eighteenth-century France. With this portrait, the author argues, Girodet inserts himself into the debate discussed in the second chapter. It is not race that is an issue but the hierarchy of races, which Girodet adeptly evens out by placing the bust of the abolitionist Raynal and Belley at the same height. Lafont argues that this portrait simultaneously presents a paradigm of binary contrasts and of equality.

With chapter four, Lafont turns towards the French colonies and North America. She focuses on two comparative case studies, one in colonial America and one in revolutionary Haiti. In both cases she considers the depictions of—or rather lack thereof—revolutionary Black men: Crispus Attucks, who was killed in the Boston Massacre, and Toussaint Louverture, who led the Haitian Revolution. In both cases, neither was depicted in their lifetime, but a lively print culture arose after their deaths. This stands in contrast to the painted depictions of two well-educated and formerly enslaved men: Yarrow Mamout and Jean-Baptise Belley. Lafont uses these contrasting cases to return to her overarching question of how Black people were depicted over the course of the long eighteenth century. The actual heroes were never subjects of works of art in their own lifetimes, but Belley and Yarrow Mamout had academic portraits done. However, she argues that these portraits deny the violence of their former status as slaves. Altogether, these cases demonstrate how art history reveals, through both presence and absence, the taboos of an era—in this case, the fear of the truly heroic Black male body.

Lafont begins her chapter on material culture and race in the long eighteenth century by questioning the lack of research on depictions of people of African descent, or Africanerie, as she calls it. The aim of this chapter is to reconsider decorative art objects, particularly luxury objects, through the lens of Africanerie. She begins with textiles, arguing the centrality of textiles to the eighteenth-century colonialism, both in the East and in the West. The remainder of her chapter is devoted to exploring the fantasy of Africanerie in clocks. Lafont begins this section by illustrating to technological relationship between timekeeping, slavery, and colonialism in the seventeenth and eighteenth centuries. Then she considers the trend of clocks depicting people of African descent beginning in the 1780s and continuing through the 1830s. These clocks, she argues, are vestiges of rococo design. As such, they are evocative of the fantasy of the distant other, likening her term Africanerie to chinoiserie or turquerie, but noting the late date of this addition to the European repertoire of the exotic other.

In the last chapter, Lafont directly addresses images of violence, specifically when and why the image of Black bodies transitioned from one of luxury and opulence, most clearly demonstrated in the portraits of white people with Black slaves as accessories, to sites of violence. She focuses on images of violence from the last quarter of the eighteenth century, particularly in the colonies and in early America to argue that violence was a new means of understanding the Black body during and in the wake of revolution and war.

Chapters three and four have the most robust arguments, with the fourth chapter clearly emerging from the third. They address the heart of what Lafont is interested in exploring: how the Black body is not only depicted visually but also how these depictions of the Black body informed how blackness was perceived in the long eighteenth century. In both chapters, she considers the overarching motives of white European artists in making portraits of Black people, specifically Black men in these chapters, as well as how they construct an image of blackness. These motives vary widely—from artistic curiosity to philosophical debate, from taming the Black male body to posthumously commemorating the Black revolutionary—but each element contributes to the larger picture of how racial blackness was visually expressed at the time when our modern conception of race was in formation. Understanding how race was conceived of in this era is critical for understanding race today.

While each chapter is well-developed and organized, some feel as though they are merely the tip of the iceberg, particularly in her chapters on whiteness, anthropology, and material culture. Each of these chapters has the potential to develop into devoted monographs, and I would like to see these topics explored further. Perhaps these chapters with their multiple avenues for new research best illustrate Lafont’s point: Art history plays a powerful role in understanding the historical construction of race, but art historians have yet to explore this role fully, despite our moral and social obligation to do so.

Danielle Ezor is a doctoral candidate in the RASC/a: Rhetorics of Art, Space and Culture Ph.D. Program in Art History at Southern Methodist University. She received her B.A. in art history and studio art from Wellesley College and her M.A. in art history from the Williams Graduate Program in the History of Art. Her research focuses on eighteenth-century French visual and material culture with a concentration in race, gender, and materiality, and her dissertation addresses the construction of white femininity through women’s vanity items in eighteenth-century France and the French Caribbean.