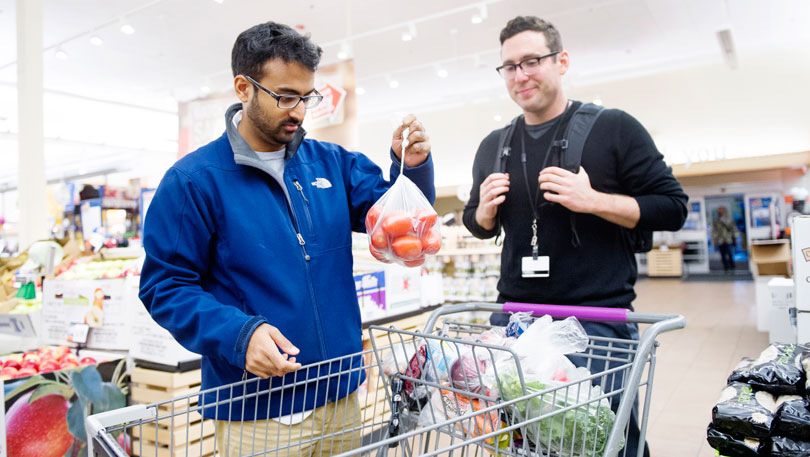 Dani Sandhu and Tavierney Rogan are having a heart-to-heart by the frozen bread section in Dorchester’s South Bay Stop & Shop. They’ve already made a loop around the store and discussed what types of food Sandhu should buy for herself, considering the gluten-free diet she adheres to for medical reasons.

While she’s well-versed in her personal nutritional needs, Sandhu (MED’18) could use some more general advice. What the medical student really wants dietetic intern Rogan (SAR’14) to tell her is what type of nutritional advice she should give to her Boston Medical Center (BMC) patients, who often are low-income and live in relative food deserts—far from a grocery store.

“We tell them to eat healthier,” Sandhu says, “but they can’t afford produce.”

Rogan nods and rattles off some suggestions: tell them to buy frozen fruits and vegetables (they last longer and are cheaper), to use canned vegetables (just wash off salty syrup), and to buy rice and beans in bulk (they’re less expensive than bread and offer the same nutrients).

Sandhu and Rogan’s conversation is the (whole-grain) bread and butter of the Dietetic Intern/Medical Student Match Program, which brings together Sargent College dietitians to practice nutrition counseling and School of Medicine students to learn about the role dietitians play in patient care. Since fall 2010, at least 100 students have participated in the program.

Joan Salge Blake (SAR’84), a SAR clinical associate professor, and Laura Judd (SAR’07), a SAR clinical assistant in the Dietetic Internship program, could see the program’s impact on the University’s future dietitians and doctors and decided to research the benefits that each side reaped from the interaction. They applied for IRB (institutional review board) approval and started collecting data from participant surveys. The results were impressive: medical students said they had a better understanding of the role a registered dietitian plays in patient care and would likely refer future patients, while dietetic interns thought their advice was valued and that the program had improved their counseling skills.

“There’s no downside to this,” Salge Blake says. “It’s been really eye-opening to see such positive results.”

Salge Blake and Judd are presenting their findings today during a poster session at the Academy of Nutrition and Dietetics Food and Nutrition Conference & Expo in Atlanta, Ga. They hope the information will spark spin-off programs at medical schools across the country.

The match program is timely. The American Journal of Medicine published an article this year citing “a severe deficiency of nutrition education at all levels of medical training.” The article reports that only 14 percent of physicians believe they were adequately trained to provide nutritional counseling, but that in 2008 61 percent of the public considered doctors a “very credible” source of nutrition information.

Carine Lenders, a MED associate professor of pediatrics and medical director of the BMC Nutrition & Fitness for Life program and Pediatrics Nutrition Support Services, says the MED curriculum offers 32 lecture hours on nutrition, but that is not enough, she says. She is pushing for more.

Apparently, MED students agree. In 2009, a group of them started the Student Nutrition Awareness & Action Council (SNAAC) to educate themselves about the topic. Members Flint Wang (MED’13) and Stephanie Lee (CAS’11, MED’14) reached out to Salge Blake to give guest lectures at their meetings. She left the sessions impressed by the students’ curiosity and remembers thinking, this is crazy; it just whet their appetite. Soon thereafter she and her colleagues began devising a program to match MED students with SAR dietetic interns to encourage future collaboration.

The DI/MS Match Program runs for four weeks each semester, usually in September and April. At the first meeting, dietetic interns are paired with MED students, walk them through a personal nutrition assessment, and help them set three realistic nutrition goals—such as improving portion sizes, the timing of meals, and the quality of food they eat.

Students meet at Stop & Shop for their second session, where the dietetic interns lead the future doctors through the store pointing out healthy, budget-friendly items and advising them on how to avoid persuasive marketing for less healthy foods.

In their third session, students tackle case studies examining a specific nutrition-related medical condition. The dietetic interns share their clinical knowledge regarding the case, and the MED students learn when to refer a patient to a registered dietitian or to provide basic dietary recommendations themselves.

Although the program offers no credit, MED student demand has outpaced the supply of dietetic interns. (Judd says 22 MED students applied this last go-round, but only 6 dietetic interns were available.) But the experience is less academic than sound practicum for future doctors expected to dispense dietary advice.

The program also showed him the importance of reading labels. “It’s amazing to me,” Burns says, “and I consider myself decently versed in science, to be that clueless” when it comes to nutrition.

By Leslie Friday for BU TodayPhotos by Jackie Ricciardi