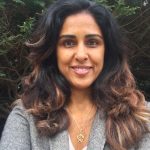 Teena Purohit joined the Department of Religion in Fall 2009. A scholar of South Asian religions with specialties in Muslim and Hindu devotional literature, religious identity formation, and modern Islam, Purohit’s particular interests revolve around theoretical issues like conceptions of religion in modern Islam and the impact of colonial forms of knowledge on modern Muslim intellectual thought.  She teaches courses on Islam, Sufism, modern Islam, religion and politics in South Asia, theory and methods in the study of religion, and Islam and the West.  Her first book, The Aga Khan Case: Religion and Identity in Colonial India, was published in 2012 by Harvard University Press. Her second book project Islamic Modernism: A Movement of Aspiration and Exclusion is currently in progress.

To learn more about The Aga Khan Case, listen to the following interview conducted
by New Books in Islamic Studies.