Kevin O’Connor, host of the venerable PBS television series This Old House, stands on a roof in Newton, Mass., helping fireplace installer Jonathan Hawkins attach the final sections of a new chimney pipe. “So, how far above the roofline are you shooting for here?” asks O’Connor (MBA’99), prompting Hawkins to explain how he calculated the height of the chimney cap based on the pitch of the home’s roof.

O’Connor has been honing this skill of asking informed questions that elicit useful answers from professional craftspeople for 15 years, making him the longest-running host of a show that’s drawn home-improvement viewers for four decades. In addition to fronting This Old House and its sister series, Ask This Old House, O’Connor serves on the editorial board of This Old House magazine and authored the 2011 book The Best Homes from This Old House.

O’Connor says his role as host has always been to act as proxy for the show’s fans, asking the questions they would ask if these pros were working on their homes. But his own knowledge of the building trades has grown since he joined This Old House with little construction experience back in 2003.

“That’s been the single biggest change for me,” he says, “going from the unknowing novice to the seasoned novice.” The added know-how has changed O’Connor’s on-air questioning style. “We don’t want to fake anything. We don’t want to pretend that I don’t know stuff,” he says. So instead of simply asking what his professional colleagues are doing, O’Connor now focuses on the hows and whys, and he thinks that’s made him a better host. “A well-prepared, smart interviewer is generally better than someone who knows nothing,” he says.

This evolution in O’Connor’s approach is one of many changes he and This Old House have undergone since O’Connor left his job as a senior vice president at Bank of America to accept a surprise offer to host his favorite television show.

O’Connor was 34 then, and he and his wife were fixing up their first house—an 1894 Queen Anne Victorian—when they ran into problems removing layers of old wallpaper. They emailed This Old House for advice, and soon the show’s painting experts arrived at their home north of Boston to film a segment for their new spin-off, Ask This Old House. O’Connor hit it off with the crew, and weeks later the show’s producers called him again: they’d been quietly looking for a new host, and they wanted to offer him the job.

“In Kevin, we found the perfect mixture of optimism and energy, two ingredients an old house owner must have to survive,” This Old House creator Russell Morash (CFA’57) said at the time. “His curiosity was refreshing. Who better to host the show than a first-time homeowner and a loyal viewer who grew up watching the show?”

The story of O’Connor’s lucky break has become television legend, “but what I tell my kids about that,” says O’Connor, “is that it wasn’t pure coincidence.” He’d worked hard to put himself in a position, he says, to take that break when it came.

Years earlier, O’Connor had been working in state government when he became interested in finance and began taking night classes at Questrom to earn his MBA. He then landed a job at BankBoston, which was acquired by Bank of America. Making that career change helped him feel empowered, he says. “All of those nights that I was leaving the job and going to school, and then leaving school and coming home and studying—all of those things paid off,” he says. Knowing he had the credentials and experience to return to finance if he needed to “made stepping off the cliff easier.” 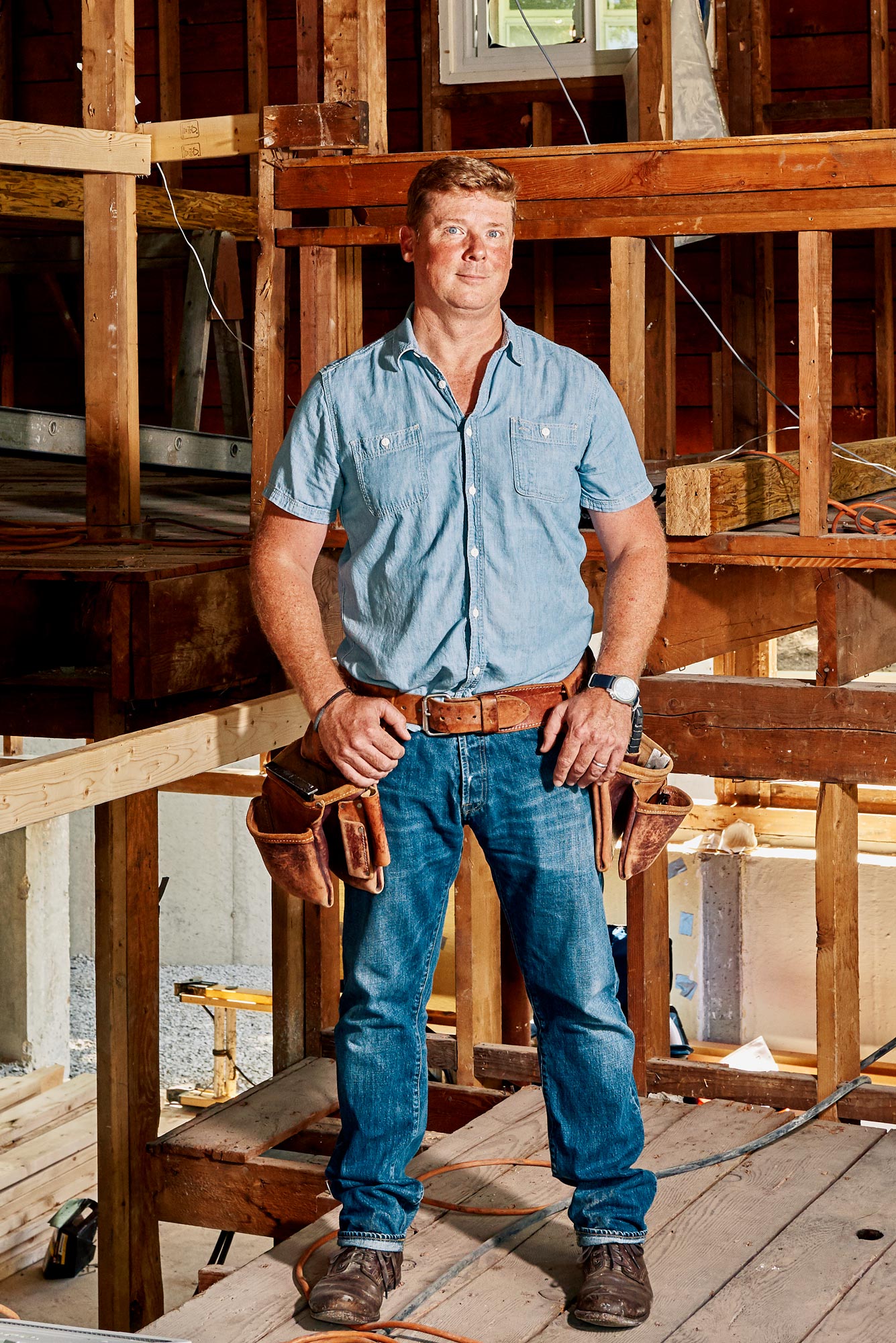 Kevin O’Connor on set—and on site—at a midcentury modern home in Brookline, Mass.; it’s being renovated as part of This Old House’s 40th season.

He never needed the backup plan. Despite having no television or theater experience, O’Connor was a natural on-screen and earned an Emmy nomination in his first season on This Old House.

Fifteen years later, the show—like the homes it features—has adapted to the modern era while remaining true to its roots. It still focuses on renovating “real houses for real customers who are spending their own real money,” says O’Connor. And while some of today’s home-improvement shows unveil two finished projects per episode, This Old House has stuck to its formula of painstakingly completing just two renovations per season.

“But there have been significant changes,” O’Connor says. “The show is now shot and edited in the contemporary style”—with short clips tightly edited together to tell a compelling story. “There was a day, when Bob Vila was host, that he could have walked around for 12 minutes with a camera following him, delivering a single-take scene,” O’Connor says. “And there were times early in my career when I was doing those things for four or six minutes.” Now, the camera shots are measured in seconds, not minutes.

“Also, the media landscape has changed dramatically,” O’Connor says. “The show is still distributed first to PBS, to broadcast on television in a primetime slot in a 26-minute format, just like it was in 1979, but now it’s also distributed on YouTube and our dot-com site and Hulu.”

During his years on the show, O’Connor has witnessed many changes in construction materials and techniques, and he’s learned to separate the true trends from the passing fads. The “tiny houses” we see on magazine covers may be cute, he says, but they’ll never catch on. “People almost always want more space than less space,” he says. “The vilification of big space, I think, is also foolish. We can build you a 5,000-square-foot house that uses less energy than a 1,000-square-foot house based on standards from just a few years ago.”

“People want to be comfortable in their homes, and that drives most decisions, after cost. I think it’s important that people realize that, especially the folks who are trying to change the world.” –Kevin O’Connor

He’s also skeptical of the phrase “green building.” He argues that, while many ecofriendly construction ideas and technologies—he cites green roofs covered in plants and dirt for insulation as a particularly egregious example—may have been conceived with good intentions, they haven’t been widely adopted because they’re too expensive or impractical.

“Comfort is always king,” O’Connor says. “People want to be comfortable in their homes, and that drives most decisions, after cost. I think it’s important that people realize that, especially the folks who are trying to change the world.”

What does excite O’Connor are technologies that can be used to retrofit existing homes, making them more comfortable and efficient while saving homeowners money. Recent improvements have made heat pumps, for example, an affordable option for both heating and cooling houses in a wide range of climates, O’Connor says. The technology has been used in several This Old House makeovers, and O’Connor believes it will soon catch on in a way that solar power, which isn’t yet affordable without government subsidies, hasn’t.

Another example is Aeroseal, a product made of tiny polymer particles that can be sprayed into a home’s ductwork, sealing off leaks. “Seventy percent of American homes use forced hot air or air conditioning through ductwork, and those things are, on average, 20 to 40 percent leaky,” he says. “Here’s a technology that—in a retrofit situation—can solve that. That’s a game changer.”

It’s clear that O’Connor cares deeply about the building trades and about the people who practice them—past and present. He refers to the construction experts who appear on-screen with him as his brothers, and he gets protective when he hears criticism of the techniques—foregoing insulation, for instance, when coal for heat was cheap and plentiful—used to build older homes. Craftspeople a century ago or more didn’t have power tools and fiberglass insulation and were making sound decisions based on their realities, he says in their defense.

Today, such tradespeople are in short supply. A 2015 survey by the Associated General Contractors of America showed 86 percent of responding firms were having difficulty finding qualified workers, and 78 percent predicted hiring conditions to remain the same or worsen. The labor shortages are the result, in part, of US high schools shifting away from vocational training programs to college preparation courses, according to the association. To raise awareness about this skills gap in the trades, O’Connor has headlined fundraisers and met with legislators, and This Old House has welcomed young apprentices to its job sites and spotlighted job-training programs around the country.

“But individual programs, I don’t think, are going to move the needle,” O’Connor says. “I heard a great quote that there are two types of jobs in the world: the ones where you take a shower before you go to work, and the ones where you take a shower after you come home from work. I think there’s a stigma against the latter.” Removing the stigma, he says, is the only way to bring enough young people into the building trades.

He adds that the trades provide excellent paths to owning a business. General contractor Tom Silva, plumber Richard Trethewey, and other members of the This Old House team are all tradespeople and successful business owners.

“As a finance guy,” O’Connor says, “I never had dreams of running my own bank.” He’s often had the itch to be his own boss. “At this stage in my life, maybe I’ll never do it,” he says. But if he decides to step off another professional cliff and start a company, “it’s going to be in the trades,” he says.