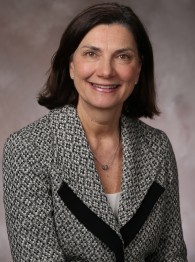 Patricia O’Brien is Vice President and Associate Provost for Academic Budgets & Planning in the Office of the Provost at Boston University. She works closely with the Provost to develop new policies and procedures that ensure that Boston University’s academic priorities, as defined by the collaborative strategic planning efforts of the academic deans and the Provost, are reflected in all budgetary decisions. Pat works closely with the Vice President for Budget, Planning & Business Affairs to coordinate the University’s annual budgeting process. In addition, she manages the Office of the Provost’s budget and human resource efforts and serves as the Provost’s liaison with the schools and colleges on budgetary issues.

Pat joined the Office of the Provost in August 2014 as Assistant Provost for Graduate Enrollment Management. In that role, she led the University’s strategic efforts to achieve and sustain its graduate enrollment goals, working with the schools and colleges on program development, targeted marketing and recruitment, student retention programs, and analysis of enrollment and financial aid. In January 2016, Pat was promoted to Associate Provost for Budget & Planning, and in October 2021, named Vice President and Associate Provost for Academic Budgets & Planning. Prior to her work in the Provost’s Office, Pat served as Associate Dean for Administration and Finance at the BU School of Public Health (SPH), beginning in 2007. There, she worked closely with academic departments and administrative units on day-to-day budgetary, human resource, and policy issues and served as the principal advisor to the Dean on fiscal and administrative issues.

A widely respected expert in international business and executive development, Pat served on the Harvard Business School faculty for more than a decade, as Deputy Dean of Harvard College and as Dean of the Simmons College School of Management before her arrival at BU in 2007. She also served on the faculty. She received her doctorate in business administration from Harvard University, her MBA from Simmons, and a bachelor’s degree in political science from Boston College.