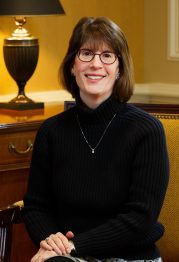 Maureen O’Rourke is Associate Provost for Faculty Affairs and Dean Emerita, Michaels Faculty Research Scholar, and Professor of Law in the School of Law. She is the senior officer of the University responsible to the Provost for matters involving faculty, and oversees faculty recruitment, appointment, and compensation, as well as the promotion and tenure process for the Charles River Campus. She works closely with the Provost on faculty policies, including those that support the University’s commitment to faculty diversity, professional development, and work-life balance, and represents the Provost in discussions with schools, colleges, and University-wide groups on issues concerning the faculty. She also supervises the University’s Equal Opportunity Office.

Maureen joined the BU faculty in 1993 after working as an attorney on IBM’s in-house counsel staff. She became a full professor in 1998 and served as Dean of the School of Law from 2004-2018 (including a term as interim dean from 2004-2006), where she led advances in the quality, relevance, and accessibility of the School’s programs and national reputation, and oversaw the completion of a state-of-the-art law school complex. A past recipient of the Metcalf Award for Excellence in Teaching, the University’s highest teaching honor, she is among the nation’s top scholars in intellectual property law. She has published extensively, co-authoring one of the leading copyright casebooks in the nation, Copyright in a Global Information Economy, and authoring dozens of articles for premier law reviews and industry journals. Her research explores intellectual property law’s intersection with a variety of fields including contract and antitrust law, particularly in the context of software and high technology.

Maureen has served as chair of the council for the American Bar Association’s Section of Legal Education and Admissions to the Bar (the accrediting agency for U.S. law schools) and has been recognized several times on The National Jurist’s list of the most influential people in legal education. She serves on the Board of Directors of AccessLex Institute, an organization dedicated to using data-driven research to improve legal education. Maureen received her JD from Yale University and her BS from Marist College, where she serves as a member of the Board of Trustees.

Learn more about the Office of Faculty Affairs.