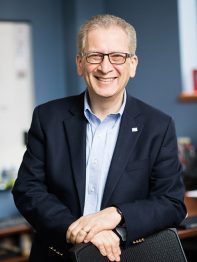 Azer Bestavros is BU’s inaugural Associate Provost for Computing & Data Sciences and the William Fairfield Warren Distinguished Professor of Computer Science in the College of Arts & Sciences. Working closely with the Provost and with senior academic leaders, he is responsible for establishing the policies, operating principles, and strategic issues that will guide the initial efforts of the Faculty of Computing & Data Sciences.

Prior to his appointment in 2019 to this leadership role, Azer was the Founding Director of the Hariri Institute for Computing, which was set up in 2010 to nucleate BU’s presence in computing and data sciences. Under his leadership, the Institute became a landmark at the crossroads of computational research at BU, engaging over 250 researchers from 38 departments, and securing over $100M in external research funding of incubated projects. Before the Hariri Institute, Azer chaired the BU Computer Science Department from 2000 to 2007. He has been a member of the BU faculty since 1991 after completing his PhD in computer science at Harvard University.

Specializing in networking, distributed systems, and trustworthy computing research, Azer has made seminal contributions to studies of web push caching through content distribution networks, self-similar Internet traffic characterization, game-theoretic cloud resource management, and safety certification of networked systems and software. His current projects focus on design, development, and real-world deployment of Scalable Secure Multi-Party Computation in support of privacy-preserving analytics. As of 2019, funded by over $40M from government and industry sponsors, his research had yielded 19 PhD theses, eight patents, two startups, and hundreds of refereed papers with over 20,000 citations.

Azer has received numerous honors in recognition of distinguished teaching, research, and service, most notably the ACM Sigmetrics Inaugural Test of Time Award for 1996 work “whose impact is still felt 15 years after its initial publication” and the 2010 United Methodist Scholar/Teacher Award of the Year  for “outstanding dedication and contributions to the learning arts and to the institution.” In 2017, he was named a William Fairfield Warren Distinguished Professor, the highest distinction bestowed upon senior faculty members at BU.

Learn more about the Faculty of Computing & Data Sciences.