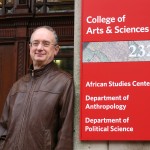 Graham Wilson joined Boston University in 2007, having taught previously at the University of Wisconsin-Madison and the University of Essex in the UK.  Wilson has published ten books and has authored numerous articles and chapters in edited volumes.  His work has focused primarily on interest groups (particularly business) and their relationship with government and policymaking.  He edited the Oxford Handbook of Business and Government published by OUP in February 2010 and authored several of the chapters in it.  He has also published extensively on the relationship between bureaucrats and politicians. In 2012 Wilson published his newest book, The Consequences of the Global Financial Crisis: The Rhetoric of Reform and Regulation (with Wyn Grant) with Oxford University Press. In 2012, Wilson was also awarded the Ulrich Kloti Award for Lifetime Achievement from the “Structure and Organization of Government Research Committee” of the International Political Science Association. Wilson’s teaching, like his research, crosses the customary divide between the study of American politics and of Comparative Politics.  He has taught both graduate and undergraduate courses in both fields. Wilson has edited both the British Journal of Political Science and Governance. He was previously Chair of the Department of Political Science at BU and at UW Madison.