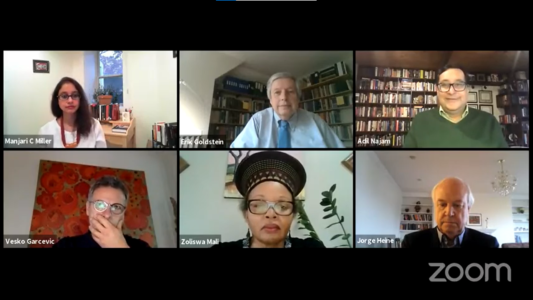 On Friday, November 13, 2020, the Frederick S. Pardee School of Global Studies at Boston University hosted a special election edition of its Beyond the Headlines @BUPardeeSchool, or BtH, series. The event discussed the results of the 2020 United States presidential election, how the electoral process is perceived around the world, and what the results mean for the rest of the world.

Panelists each discussed how the U.S. election was observed around the world and how different countries felt it might effect them. In the United Kingdom, for example, people were left wondering what a Biden administration could mean for their country given Prime Minister Boris Johnson’s strong identification with President Trump, while Balkan/South-Eastern European countries openly celebrated Biden’s victory and the prospect of increased U.S. involvement in the region. In Africa, people were confused by the seemingly conflicting notion of “one man, one vote” and the Electoral College and how this might make give the perception that the popular vote plays second fiddle in choosing the President. However, South Africa in particular applauded the wide utilization of absentee and mail-in voting as a means to mitigate COVID-19.

Panelists unanimously agreed that the Biden administration will take a more level-headed approach to global diplomacy calling it a “return to normalcy” and “stability” in many cases. They went on to say that, upon taking office, the Biden administration will bring about a return to multilateralism as well as rejoin global institutions/partnerships including the World Health Organization (WHO) and the Paris Agreement on climate change. Despite all the anticipated change, the panelists also speculated that not much will change under President-elect Biden regarding Israeli peace agreements, rhetoric towards China, and the status quo with North Korea.

A recording of the session can be viewed on the Pardee School’s Youtube channel or below.

Beyond the Headlines (BtH) is a regular series at the Frederick S. Pardee School of Global Studies which seeks to cultivate informed conversations among experts and practitioners on issues that are currently in the news headlines, but to do so with a focus on intellectual analysis and on longer-range trends. Recent BtH discussions have focused on topics including civil-military relations, the importance of global studies, Russia-U.S. relations, the crisis in Kashmir, and International Women’s Day.