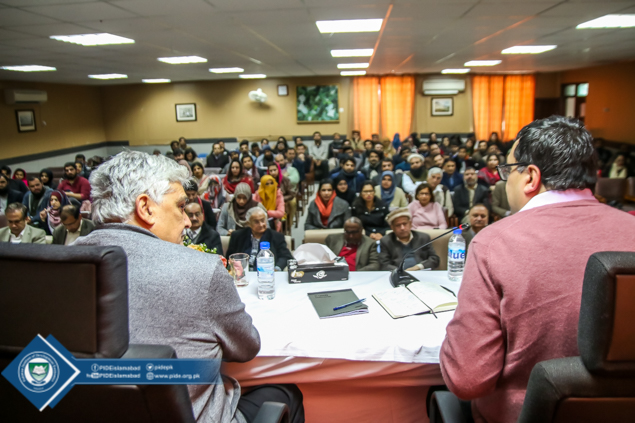 Professor Adil Najam, Dean of the Frederick S. Pardee School of Global Studies at Boston University, was invited by the Pakistan Institute of Development Economics (PIDE) to launch the new year of their speakers program by presenting a special lecture on “Ideas Matter: A Reading List for Policy Wallahs.”

On January 3, 2020, Najam discussed and led a conversation an eclectic mix of ten books that he said had helped him to “think about policy problems, particularly in developing countries such as Pakistan.” The event was presided over by Dr. Nadeem ul Haque, the Vice Chancellor of PIDE, former head of Pakistan’s Planning Commission and earlier a senior official at the International Monetary Fund (IMF). It was attended by a students, researchers as well as senior policy-makers.

Najam highlighted that the authors and books he had chosen were not necessarily the “best” books – because there is really no such thing. He stressed that even though he disagreed with a number of authors he was talking about on various details, these were all books that he continues to learn from. The talk elaborated on how. The ten authors that Najam discussed included Richard Thaler (Nudge), Daniel Kahneman (Thinking Fast and Slow), Thomas Schelling (The Strategy of Conflict), Nassim Nicholas Taleb (The Black Swan), Rachel Carson (Silent Springs), Angus Deaton (The Great Escape), Daron Acemoglu and James Robinson (Why Nations Fail), Elinor Ostrom (Governing the Commons), Amartya Sen (Development as Freedom) and Mahbub ul Haq (Human Development Reports). More details and video here.

Adil Najam is the Inaugural Dean of the Frederick S. Pardee School of Global Studies at Boston University and is a former Vice Chancellor of the Lahore University of Management Sciences (LUMS).