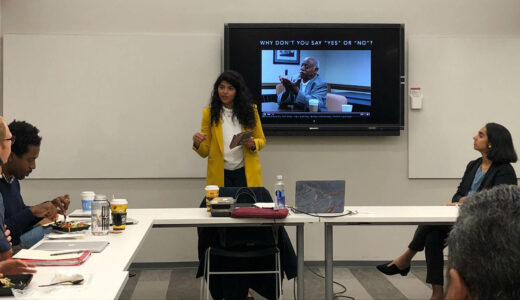 Lori spoke at a September 26-27, 2019 conference at Boston University on the “Role of the University in the Crisis of Forced displacement.” At the conference she presented on a panel entitled “Technologies and Solutions: Ethically Appropriate Technology Development and the Place of STEM Fields in Teaching and Research on Forced Displacement”

Lori spoke as part of an October 14, 2019 panel at the University of Columbia School of International and Public Affairs on “Democratization and Citizenship” alongside Prof. Dipali Mukhopadhyay, Prof. Sheri Berman and Prof. Jack Synder for a Conceptual Foundations class.

On October 22, 2019 Lori gave another talk on Offshore Citizens at the Massachusetts Institute of Technology School of Urban Planning and Architecture as part of the IDG Development Seminars.

Lori attended the opening of a migration exhibit at the Institute of Contemporary Art in Boston on October 22, 2019 as a member of the advisory committee of the ICA’s new exhibition on migration entitled “When Home Won’t Let you Stay.”

On November 13, 2019, Lori spoke on a panel hosted by Kilachand Honors College on “Passports and Documentation” where she discussed the outsourcing of passports, based on research from Offshore Citizens.

On December 12-13, Lori spoke as part of the Migration and Refugee Law Workshop at the University of California, Berkeley School of Law where she presented her current research project “Urban Refuge: Access to Information and Access to Aid for Refugees in Cities.”