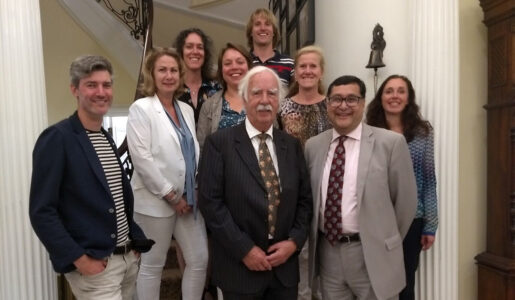 A delegation of senior negotiation trainers and policy practitioners from the Netherlands on a study trip to Boston visited the Frederick S. Pardee School of Global Studies at Boston University on September 24, 2019 and met with Dean Adil Najam. The delegation of members of the Mutual Gains Network includes practitioners with many years of experience in training and practice of consensus building and conflict resolution in policy settings.

During their meeting, Najam briefed the delegation on current activities and initiatives at the Pardee School focusing on policymaking, negotiations, and conflict resolution. During the meeting the group discussed some of the latest developments in the field of mutual gains consensus building and also emerging challenges and opportunities in areas such as climate change.

The delegation was led by Frans Evers, chairman of the Mutual Gains Network in The Netherlands and a leading authority on the mutual gains approach to policymaking. He was chairman of the independent National Contact Point for the OECD Guidelines for multinational enterprises from 2006 till 2014.  He was also deputy-chairman of the Dutch Commission for environmental impact assessment since 2003 till 2015. He was also a member of the advisory board of the Netherlands Environmental Assessment Agency for many years.

During their visit to the Pardee School, the delegation also attended a Pardee School class taught by Najam on Global Policy Analysis.