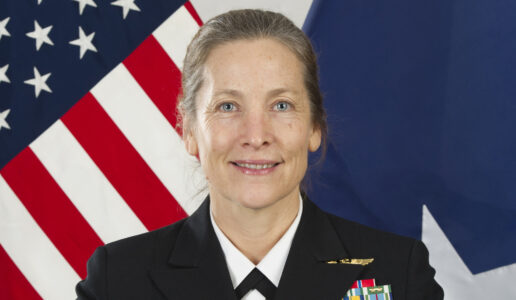 Rear Adm. Shoshana Chatfield (Pardee ’88) has been named the next President of the United States Naval War College — making her the first woman to take the helm of the historic Newport, Rhode Island, school.

After graduating from Boston University in 1987, Rear Adm. Chatfield was commissioned through the Naval Reserve Officer Training Corps in 1988 and was pinned as a naval aviator a year later.

Secretary of the Navy Richard V. Spencer announced Rear Adm. Chatfield’s appointment in a June 14, 2019 statement, calling her appointment a “historic choice.” From the text of the statement:

“Rear Admiral Chatfield is a historic choice for the Naval War College. She is the embodiment of the type of warrior-scholar we need now to lead this storied institution as it educates our next generation of leaders,” said Spencer. “As our Education for Seapower (E4S) Study noted, our capacity for critical thinking in an age of increasing complexity will be our most important strategic advantage.  Admiral Chatfield will play a pivotal role in leading the War College as it integrates into the new Naval University system we are now establishing to foster a culture of continuous learning in the naval services.”

“This is indeed a historic choice, and an especially excellent one for the Pardee School community,” said Pardee School Dean Adil Najam. “Not only is Rear Admiral Chatfield a distinguished alumna of our international relations programs and what is now the Pardee School, but the U.S. Naval War College in Newport has long been a close and frequent collaborator for many of our faculty members.”

As the Navy’s “Home of Thought,” the U.S. Naval War College educates and develops competent and ethical leaders, supports combat readiness, strengthens global maritime partnerships, helps define the future of the service branch, and contributes original strategy and legal research to the national and international community.