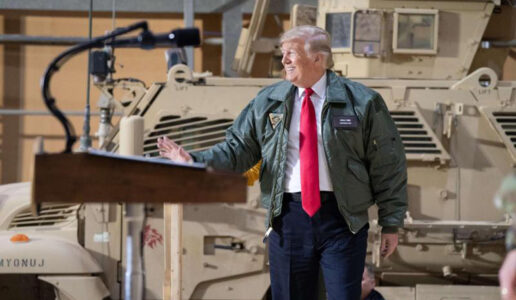 Aftandilian’s Op-Ed, entitled “Despite Warnings, Trump Unlikely to Oppose Syrian-Russian Offensive in Idlib,” was published in The Arab Weekly on June 16, 2019.

In a surprise move given his cosiness with the Kremlin leader, US President Donald Trump tweeted that Russia and Syria are “bombing the hell out of Idlib province in Syria and indiscriminately killing many innocent civilians.”

Trump then asked rhetorically of those countries: “What will it get you? STOP.”

Trump later said “bad things are happening” in Idlib. He may have been reacting to reports about the bombing of hospitals in Idlib and the flow of refugees out of the province after attacks on civilians.

Although Trump is not known to be interested in the domestic situation of other countries, he is said to be moved by visuals. Pictures or videos of suffering children have made a particular impression on him, as when he saw footage of young victims of a chemical weapons attack in Syria in 2017, for which he ordered missile strikes on a Syrian air base.

Nonetheless, there is every reason to believe Trump will not respond militarily to an offensive in Idlib unless the Syrian regime uses chemical weapons there. That seems to be a red line for Trump and he reacted briefly but militarily in 2017 and 2018 when such weapons were used.