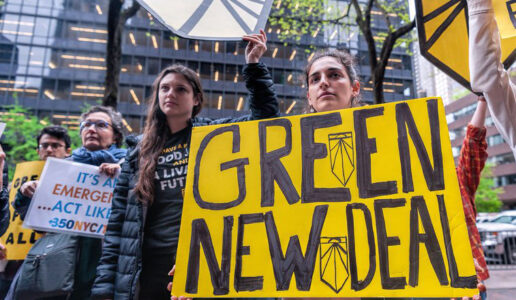 Gallagher’s Op-Ed, entitled “Treating the Morbidity of the Multilateral System: Toward a Global Green New Deal,” was published by OpenDemocracy on May 13, 2019. He co-wrote the article with Richard Kozul-Wright, Director of the Division on Globalization and Development Strategies at the United Nations Conference on Trade and Development.

Antonio Gramsci could recognise an interregnum when he saw one; and he would certainly have little problem identifying “the great variety of morbid symptoms” that have emerged since the Global Financial Crisis. Over the last decade, as policy makers in rich and poor countries alike have clung to the hope of returning to the halcyon days of the “great moderation”, they have largely failed to address the persistent problems of increased economic polarisation, heightened social insecurity and globalized environmental breakdown.

The accentuation of these crises is in part a result of the unbalanced policy mix of bank bailouts, light touch financial regulation and austerity in all but a few nations in the aftermath of the crisis. Given the interconnected nature of the crises we are facing, it also reflects a failure to build effective cooperation across national borders. Since Gordon Brown led the G20 charge to stem the advent of a global depression, trade tensions have paralysed the World Trade Organization (WTO); migration crises have stoked political division at the UN; rising indebtedness has pitted lenders against borrowers at the IMF; tax evading corporations have triggered a fiscal race to the bottom everywhere; and some of the world’s largest emitters of carbon dioxide are either rejecting the Paris Climate Accord outright or quietly blowing its targets.

There is no shortage of pundits willing to pronounce on thecrisis of multilateralism, but whether they place the blame on local politicians, distant rivals or rootless technologies, the talk invariably revolves around saving the “liberal international order” that emerged 75 years ago from its grandiose New Hampshire provenance.

The Bretton Woods system promised a value-driven, mission-oriented and rules-based international economic order, tasked with promoting coordinated actions to deliver full employment, prevent imported deflation and austerity, and pre-empt beggar-thy-neighbour policies that could upset the stability of the global economy. It provided institutional and ideological support for governments to raise the living standards of their populations while leaving policy space for sovereign states, at all levels of development, to pursue their particular national priorities.