Beyond the Headlines: 1999 NATO Intervention in Yugoslavia 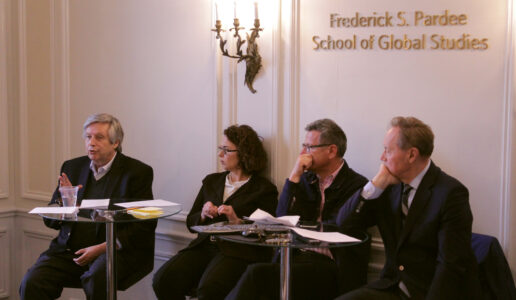 The Beyond the Headlines @BUPardeeSchool, or BtH, series at the Frederick S. Pardee School of Global Studies at Boston University continued on April 8, 2019 with a discussion on the 1999 NATO intervention in Yugoslavia.

The NATO intervention in Yugoslavia was a military operation against the Federal Republic of Yugoslavia during the Kosovo War lasting from March 24, 1999 to June 10, 1999. The panel examined how the intervention not only had an impact on the Balkans and Europe but also on global international relations.

Goldstein outlined the historical context of the intervention, and discussed the fear of both the United States and United Kingdom at the time that the crisis could compound and spread into a larger crisis such as the one that precipitated World War I.

“The fear was that a Kosovo independence movement being fought by the Serb government or the Yugoslav government from Belgrade and how that might engender Albanian involvement in pursuit of a greater Albania which would ignite Macedonia — the one bit of the former Yugoslavia that hadn’t yet gotten to any difficulties other than its name,” Goldstein said. “There was this fear that this was the beginning of an almost first World War-like set of knock-on consequences.”

Stern discussed her research on Radovan Karadzic, the former Bosnian-Serb leader convicted by a United Nations International Criminal Tribunal of genocide and other war crimes in his campaign of terror against civilians, and how he used fear to carry out his political agenda.

“What happened to the Serbs in Bosnia is that they had been the most numerous ethnic group in Yugoslavia, and when Bosnia was about to break off, suddenly they were about to be outnumbered by Muslims,” Stern said. “What happened was [Karadzic] massively exaggerated the threat to Serbs about what would happen to them when they became a minority. The fear was deliberately strengthened and spread.”

Lukes discussed the implications of the intervention on NATO’s reputation in the region, and emphasized that no involved parties emerged from the crisis with a clean reputation.

“NATO lost its reputation in Central Europe. Poland, Czech Republic and Hungary joined NATO on March 12, 1999. They saw in it their return to Europe,” Lukes said. “Twelve days later they were demanded to join in a fight that was ethically ambivalent at best. They didn’t know who the greater criminal was — whether it was the Bosniacs, the Croats, or indeed the Serbs. It was a mixed picture as far as they were concerned.”

Beyond the Headlines is a regular series at the Frederick S. Pardee School of Global Studies which seeks to cultivate informed conversations among experts and practitioners on issues that are currently in the news headlines, but to do so with a focus on intellectual analysis and on longer-range trends. Recent Beyond the Headlines discussions have focused on topics including Brexit, International Women’s Day, the most recent Brazilian elections, and the Rohingya crisis in Myanmar.