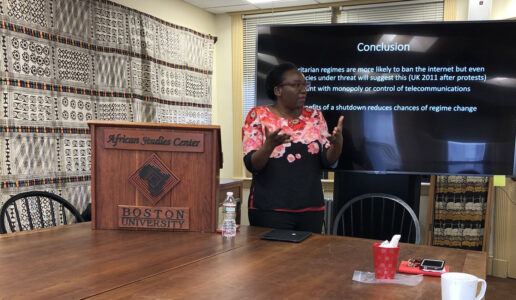 The African Studies Center, an affiliated regional center of the Frederick S. Pardee School of Global Studies at Boston University, hosted a talk with Chipo Dendere, Visiting Assistant Professor of Political Science and Consortium for Faculty Diversity Scholar at Amherst College, as part of their Walter Rodney lecture series on January 28, 2019.

Dendere gave a lecture entitled “Understanding Political Transitions in the Social Media (Digital Age),” that covered a range of topics including social media and politics in Africa including concerns about government co-option and control of Twitter and other platforms.

Dendere is a Zimbabwean-born political science scholar whose research interests include the impact of voter exit (emigration) on the survival of authoritarian regimes, how countries democratize, and the factors that sustain or threaten democracy. She also studies the impact of remittances — the money individuals send to family members in the home country — on political institution.

The Walter Rodney Seminar lecture series is interdisciplinary, and has included presentations by established and incipient scholars in all Africa-related disciplines, including history, anthropology, political science, economics, sociology, public health, literature, visual arts, musicology, religion, Islamic studies, international relations, and public diplomacy. “The Rodneys,” as they are often referred to, are a keystone of the weekly activities of the African Studies Center, and regularly fill the room with faculty, students, and community members.