Pardee Works: Careers With the CIA and DIA 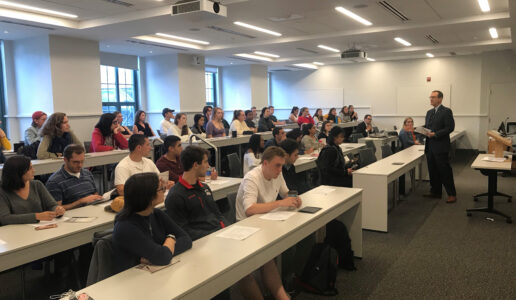 The talk, entitled “Career Opportunities in the CIA and DIA,” was part of the school’s Pardee Works series.

Wippl is a former Central Intelligence Agency officer, and spent a 30-year career as an operations officer in the National Clandestine Service (NCS). Wippl has served overseas as an operations officer and operations manager in Bonn, West Germany; Guatemala City; Luxembourg; Madrid, Spain; Mexico City; Vienna, Austria; and Berlin, Germany. On assignments in CIA headquarters, he served as the Deputy Chief of Human Resources, as the Senior NCS representative to the Aldrich Ames Damage Assessment Team, as Chief of Europe Division and as the CIA’s Director of Congressional Affairs.

Woodward is a former Central Intelligence Agency officer who, during his twenty-year CIA career, served as an operations officer in the Clandestine Service and as a technical intelligence officer in the Directorate of Science and Technology, with assignments in Washington D.C., East Asia, Africa, South Asia, and the Middle East. He also served as the Director of the U.S. Department of Defense Biometrics Management Office from 2003-2005 where he received the Army’s third highest civilian award for his work on using biometric technologies to identify national security threats.

A representative from the Boston Regional Intelligence Center (BRIC) was also in attendance at the talk to discuss student internships with the organization.

The Pardee Works series focuses on bringing professionals currently working in the diverse field of global studies to present for and network with Pardee School students. In addition to the annual Pardee Works career symposium, recent Pardee Works talks have covered topics careers in the Foreign Service.